A new stage has been revealed today for Super Smash Bros Brawl.

It's called Shadow Moses Island, and originates in the Metal Gear series. So it's Snake's home stage. It has high walls on the left and right which can be destroyed.

Metal Gears will appear in the background periodically. Also since it's his home turf, Snake can communicate with his team on this stage. 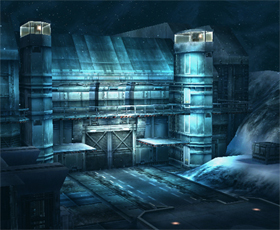 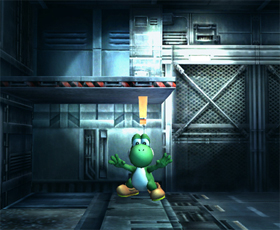 I was only taking a leak. 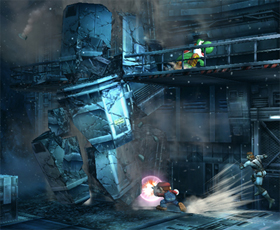 The walls come tumbling down, we are one. 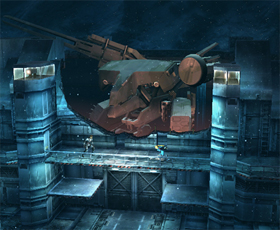 I think you want next door. 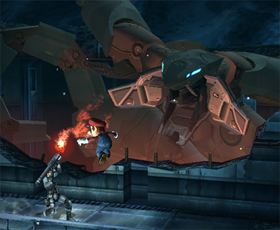 Mama mia, you burn-a my face.

Ooh. Looks like flamethrower (last picture) but it's just a Mario fireball.

Is anyone else slightly annoyed by the voice acting for the Metal Gear characters?

This was a sweet update. The videos are so funny and the ! on Yoshi was funny too. Man this game is going to be the best game of the Smash series.

This stage is awesome! I like the death-match feel to it. No other stage is like this.

Nice looking stage. It's starting to look as if a lot of stages are destructible.

This was a really good update. I'm a little mad at snake for thinking yoshi was a girl but I still might pick him.

Their mouths don't match the voice acting. And when the metal gears come. I think part of the stage background's been obliterated.

Not sure I get that spotlight thing, but other than that it looks good.

Two items from mother are back and nice video - best one yet. I love the song and this stage.

I hope they reveal more updates about what snake says about some of the characters.

This is just getting better and better.

You know, I thought about it, and I was really dumb for saying that. What was I thinking? Snake in brawl is going to be awesome. Sorry for saying that earlier. Now the only thing cooler would be if megaman or sonic were in it.

The spotlights, metal gears, and breakable walls are cool. I'm going straight online when I get this.

Y'know, I have always wondered what a yoshi tastes like as well.

Snake has as much right to be in the game as any other character, I think a few cross over characters are a good idea.

Well YoshLee, who could blame him. Yoshi lays eggs, most people would think he's a girl if they saw him do that, if they never know what he was beforehand.

I'd rather have Solid Snake than Sonic in this Game.

Holy crap I just realized that I own the moses action figure in the top left.