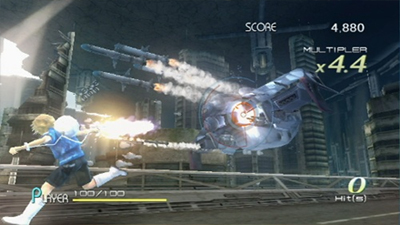 Over at the Nintendo Conference, a sequel to N64 rails shooter Sin & Punishment has been announced for Wii. Developed by Treasure, the first game was never released outside of Japan (until the Virtual Console came along), but it's held in high regard by many.

Sin and Punishment 2 will make use of both the Nunchuk and Wiimote to control movement and aiming. The game is said to hit the US in Spring 2009.

A few screenshots are already up.

WOH HO! I cannot wait for this, the first Sin and Punishment was great (although a little short and easy to beat) so this sequel is definitely on my "after Christmas list".

My friend got the first one for no reason on the VC and we loved it.

Looks pretty cool already. Tried Sin and Punishment, and it was alright. Hopefully this game takes the good concept and fixes the flaws.

Played it on VC, the game was badass. Truly in need of a sequel.