The Dojo is starting the new year with a bang, today we get another good Super Smash Bros Brawl update: Snake's final smash.

On doing the move, the player controlling Snake will get a 3rd person over-the-shoulder view of the action and a targeting reticule will appear.

Snake uses a grenade launcher to blast the other fighters, he can fire a total of 12 grenades, 6 in each clip. There's also a time limit, he can't stay there indefinitely. 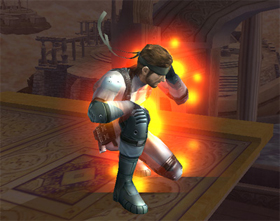 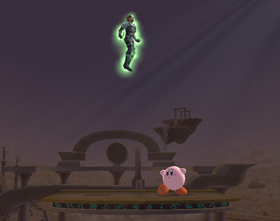 Ohz noz, teh Martians are landing. 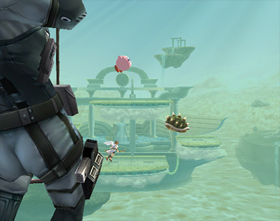 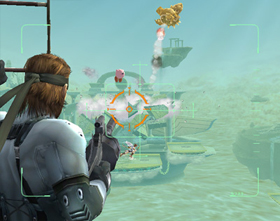 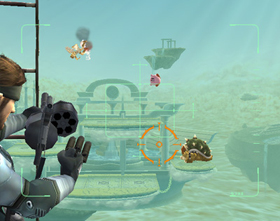 Bury my shell at Wounded Knee. 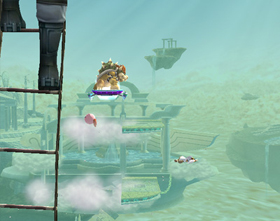 Then it's time I disappear.

A great update, people have been wondering about this for a long time. The final smash is alright but not the best.

They should have announced Olimar's moves.

AWESOME! I can't wait to try his final smash, but what about the other characters? Do they have to fight in that angle to while his fs is in effect?

Ha! I love the ladder.

Kind of like the Dragoon except that you just need to get one item instead of three and you have 12 shots instead of one. I think it should have been heat-seeking missiles instead of grenades but I guess they do have to make it fair somehow, since he's now out of the battlefield and can't get hurt.

Cool. I knew it would be something spectacular. It probably looks better actually playing the game though. Just one more month guys.

Operation Wolf was the coolest. Now there is a game they should bring to the Wii. Ahhhhh, the memories. Thx WiisWorld.

Not a bad final smash, could be better though.

So this is how it works, he shoots people and they die for real?

I thought this a possibility a while back. Now they're doing the stuff you would only expect in the distant future.

Hah, that's pretty cool! I was hoping you would comment on Snake's tight butt in the third pic though.

I thought Snake's final smash would be something like this.

This is slightly puzzling, as they said Snake wouldn't be using his guns.

You remember ninja turtle game and battletoads. A Battletoad in smash, WHY not!

Nice update. I really like Snake's final smash. In my opinion this is one of the best final smashes there is, almost as good as Link's.

What final smash is better than this one?

I like his final smash but I thought it could have been more original. Still cool though.

Uhhh, Diddy Kong Lover, King Dedede's final smash was already revealed. Anyway, awesome update. I was thinking something like a nuke but this works too.

Oh my god the third photo, Snake has a super wedgie and you can see his ass.

Diddy Kong lover, you're not the only one wants Blaziken in Brawl.

Snake at a disadvantage when he comes back on stage. I would kick his ass for bombarding grenades at me.

Cool. I was expecting Snake's final Smash to be Metal Gear or something, but this is way better than I thought.