Snake stops by for a Brawl

It's all about Solid Snake for today's Super Smash Bros Brawl updates.

Snake is a Konami character and originates from the Metal Gear Solid games.

To coincide with Snake's arrival he will also have a MGS-themed stage, but Sakurai plans to reveal more about that at a later date. 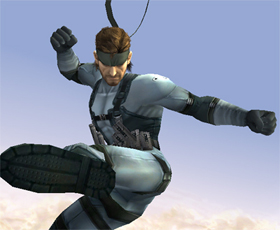 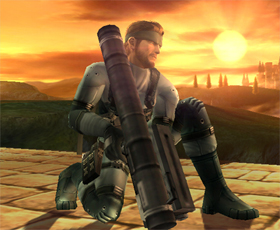 Another day, another missile. 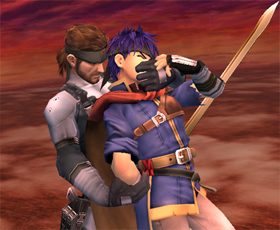 The last weapon you learn is the knife. 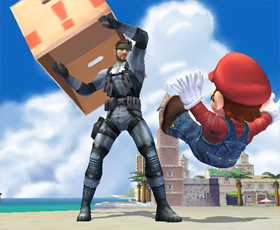 No coins in here fatboy.

Snake's special moves have also been revealed, they are: 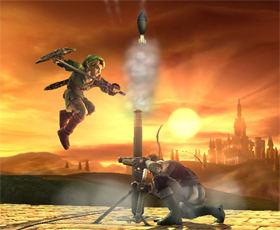 It's dangerous to go alone! Take this. 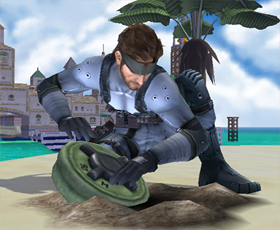 This island is MINE, paaahahaha. 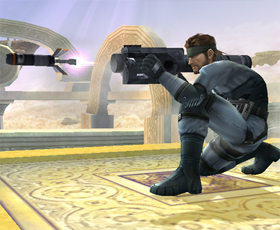 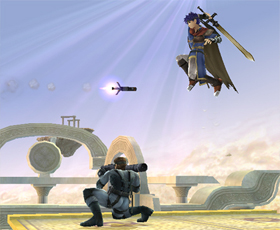 The missile is mightier than the sword. 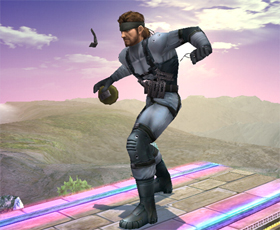 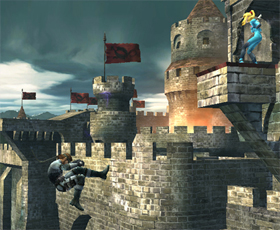 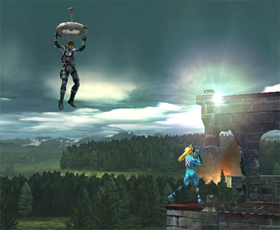 So are you doing anything later?

Good update, even though we knew this was coming. Nice to know what his moves are though.

I've never played a metal gear game but this update tells me otherwise.

Awesome. It was only a matter of time. And I was a little late (6 hours) checking the updates today. Great way to finish off the week.

Solid Snake is so badass. Even his NAME is badass. But what is that cypher thing? I've only played MGS on Gamecube.

The fourth one is really funny and hilarious. I still hope ness comes back but at least ice climbers are back. Go snake.

Loled at the pics so funny. So is the mine his down B move? And what is the box?

Finally. I thought he might have been canceled. Ok, this is good. Maybe other third-party characters might make it onto the sight. BOOM. HEADSHOT.

Guess what? All characters from the movies has been revealed! Get ready for VETERANS AND NEW CHARACTERS.

Snake deserved this kind of entrance. Three moves, a song, and finally his own character page. Awesome.

Oh god, this is awesome! They finally revealed him. And his picture kind of changed.

AWESOME! I can just tell, Snake's going to be a kick-ass character.

I LOVE THIS UPDATE! I already knew he was in, but I'm going to be Snake for an extremely long time.

That song is simply beautiful. I can't wait to see what Sakurai and his team can cook up in terms of a level for Snake. Does he seem ridiculously overpowered to anyone else, or is it just my imagination? I can't wait for that hostage-taking move, by the way.

I could really imagine Snake fighting along the Nintendo Smashers now. Only thing I'm interested about him now is what does he do in the story, his presence gives off some importance.

Snake is too amazing for words. Now that this is out the way, everything we've seen already is already told. We shouldn't hear too much about stuff we been knew for so long.

About time they confirmed Snake on the website. Funny how it took so long. Anyway, I don't know how excited I am to see this guy. I've never played any MGS, so I didn't really know him before Brawl. Oh well. Perhaps this will open my eyes to new things.

It's nothing but new characters and returnees from now on.

How is Nintendo going to let this game get away with Snake comitting rape in the third picture!? By the way, they better include the original Metal Gear theme and not that crappy MGS4 song.

Well, now that Nintendo's shown us what they got, other characters from different companies may be introduced. Who wants Sonic (I do!)?

He looks like a cool character plus captions are funny.

Holy. 3 updates in one day, and good ones too! Snake is pretty cool and his moves are awesome but I still think the remote missile (the Nikita) is too much like PK Thunder (Ness' move).

Snake looks a little too violent. I mean look what he's doing to Ike. I sure laughed at the caption no coins here fatboy.

This is so awesome.

I'd like to know if other non-Nintendo exclusives are coming to play. I'm going to assume, for now, that they'd only use people that have originated on their consoles, which counters my wanting Sonic and a buddy or three to appear in the game.

FINALLY we get an update on Snake. I mean, up until now, all we knew was that he was in the game and that he used explosives, it's nice to see some more info than that.

Lol The 4th caption is CLASSIC! Finally, a 3rd party character is confirmed! The count is up to 1.

Snake we shall not fail you we SWEAR.

The third pic makes ike look like a weenie.

I kind of forgot Snake was going to be in this.

Can I say this? Definitely the best new character! Lolz at 4th caption.

He is going to be so awesome.

Everybody's probably having a "movement" in their pants right now about this update, but I look at it as just another character confirmed. Because honestly, that's all it is with the only exception being the fact that he's from a non-Nintendo franchise. Big deal.

Friday has the best updates. Last friday was ice climbers. This friday is snake.

Man I thought Snake wasn't going to be that good, but looking at these pictures he's going to be the third character I want to try (1 metaknight 2 pit).

I sort of agree with Pichu Fan. I prefer they keep it to Nintendo Only, but Snake does look pretty badass.

So now there's only 2 more characters left to be revealed (Captain Falcon & Ness) because so far they've revealed only/all the rosters that you begin the game with. Only 2 more and probably a couple more newbies and the rest (Like Luigi, Ganondorf, Mewtwo and maybe Sonic) for the games release date. Nonetheless this is AWESOME.

Man I hope they put in sonic and knuckles that would ROCK.

I'm really surprised they announced Snake so soon. I didn't expect this until mid October.

The best newcomer would be megaman, X, or Zero.

I want to play as snake in brawl.

Dang the music sounds just like pirates of the caribbean. I love it! Did Hans Zimmer have anything to do with this piece? The update is also kind of nice but I'd rather keep the roster Nintendo only.

The captions aren't so funny now that there's a violent character, especially the 3rd screenshot. I find it very offensive to fire emblem fans and that means Sakurai should have rated the game PG because lil kids that see that screenshot will probably say: what's snake doing to Ike? So I suggest that Sakurai should quickly get rid of that screenshot before some criticism comes in his mail box, and only the 4th screenshot seems funny.

Ok random calm yourself down a little bit, snake isn't too violent. It IS a fighting game and who said you control what the creators of the game should do. How about you sit there and accept what they post and not complain about it.

I hope they put silent hill monsters in since they're konami.