Gaming legend/has-been Sonic the Hedgehog will be making a cameo appearance in the upcoming maraca-fest Samba de Amigo by Sega.

Not content with that, he will have his own entire bonus stage set in Green Hill Zone, with chao and all sorts in the background. Presumably Samba-Sonic will move in time with the music as you shake your stuff. 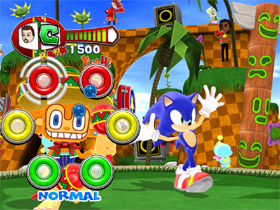 Good old Sonic, you never know what he's gonna do next.

Not too surprised, there was a Samba de Amigo stage in Sonic Riders.

Everyone knows that if you are a hasbeen superstar, the only thing left to do is Dance.

Sonic's career is over now, I doubt that unleashed will help him.

Aww. That's heck of sweet. Sonic looks so cool in that pic. I'm thinking about getting this game anyway.

Cool, sort of. Now use Underground Zone from Sonic 2.

Would have been cooler if he was in mad world, man would I love to shove a road sign through his head.

What if you have debug mode on sonic three you can start breakdancing.

Cool. I remember that there were chao in spaceships in the background of one of the levels in the original, so this comes as no real surprise.

Has anyone else noticed the mii in the top right corner is floating 0_o.

Well, Sonic and Samba are good friends, and they have been in games together, so I think this is pretty cool.

Double you tee eff? Sonic is down and out, he had his day (sonic adventures 1 and 2) but now it's all the same old crap (secret rings, new sonic the hedgehog). Not that they're completely bad, they are just crap compared to what it used to be.

I've got this game. When I first saw this sonic cameo, I was surprised and excited at the same time.