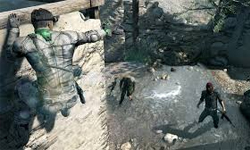 State of the art bang bangs

Tom Clancy's latest game Splinter Cell Blacklist has been confirmed for release on Wii U, as well as the older gen consoles.

The modern era has brought with it a plethora of ways to deaden enemies - remote controlled drones and all types of gadgetry are available.

See the trailer below for a taster of how the GamePad comes into play: