A press release from publishers Alten8 has announced Squibs Arcade for WiiWare. It's a series of small games, styled as a homage to the old LCD machines that were rife during the 80s. 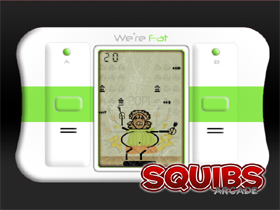 Not only this, each mini-game is a parody of a popular modern day title. They include:

Head over to the Squibs Arcade page to see other screenshots and try to guess which games inspired them. The release date for this is Q2 2009, so that's.. sometime soon.