Quite an important update from Sakurai today, it gives us some details on a single player mode in Super Smash Bros Brawl.

It's called The Subspace Emissary and it's a side-scrolling action game, complete with a storyline and everything. Ok, less yap, more snaps. 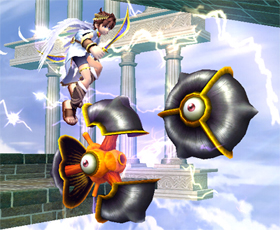 Pop him in the eye, Pit. 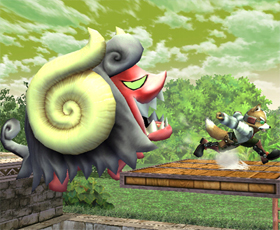 This guy's got bad news written all over him. 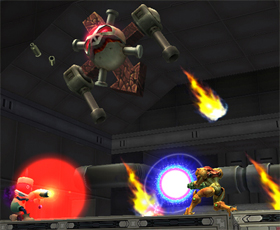 If you ever build a space ship, make the guns movable. 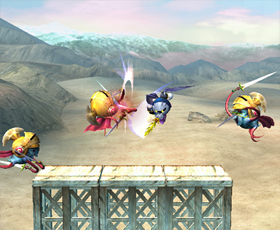 Attack of the roman smurfs. 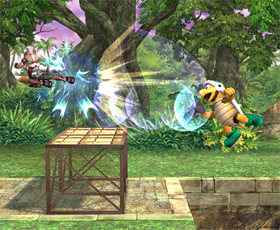 Throw more hammers, you're making it too easy. 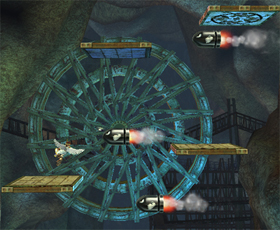 Where's Mario when you need him.. 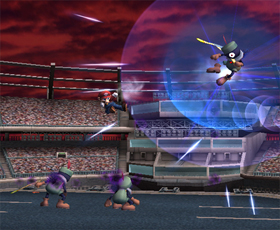 Oh there he is, hogging the limelight as usual.

The storyline shows character development in some of the big players. It's helped along by a series of video clips. Here are some stills from those: 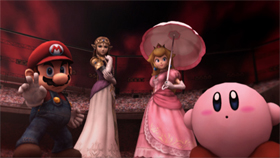 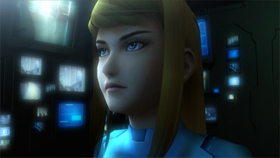 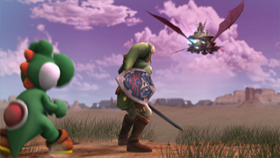 Dammit, we'll be waiting 25 minutes for the next one. 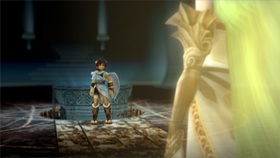 I didn't wanna say anything but er, hehehe I can kinda see through your dress.

The caption under the link and yoshi pic is pretty funny.

A word of advice for link and yoshi. Bring a ds next time so you don't get bored.

One of the best updates yet, I say.

Princess Peach was not officially confirmed, but yet she's in the intro shot! Oops, did I spoil that one for you?

Great news, I still wonder about that sand bag thing.

I guess instead of polygons or fire frames they have this guy, but what about the metaknight stage? And they never announced peach in the game, looks like we have two new characters. This news was awesome.

Really Nintendo is coming out strong. Sony is falling apart and microsoft is stealing other peoples' stuff, because all they got is halo and... Halo is all I can think of.

This is really interesting but looks a little hard, I think the sandbag like robot things are going to be like wire frames.

Platuna from Kid Icarus is back.

The picture of Link and Yoshi makes me wonder about the rumored co-op mode. And it would be interesting if Platuna is a playable character.

I like how those new robot/bomb/grunt people can hold weapons (Samus and Mario pics).

So many pictures! So little time.

I was thinking. I see a Hammer Bro in that pic with Fox, and he has been confirmed as an assist trophy. Does that mean that the enemies may also be assist trophies? I don't know, but I think it's possible.

I know what's going on in the smash universe.

Here's what I'm going to say. I'm so damn lucky for preordering this game.

So, Peach is going to appear too?! Cool! I hope all Mario characters will appear.

Peach. Another "Well, DUH!" character. Anyhow, I loved the Adventure Mode the last time around; add in character development and a story, and I'm beyond sold.

Best update yet. This is going to be the best game ever for the Wii. The only update that was as good as this was the update giving the release date. I am so happy I have a Wii. This game rules.

Cool. I liked the adventure in Melee. This sounds even better.

When I saw this I freaked out.

Sony is the one that steals people's stuff.

Cool I'm Guessing peach is in. But I still want Pacman from Pacman world 3 in Brawl.

If only it wasn't side-scrolling, because if its gonna be any good (and boy does it look good) it's going to take ages to complete. And pichu fan, zelda HAS been confirmed.

Its been unofficially confirmed by a LoZ creator in an interview that Ganondorf and Sheik will be playable in SSBB.

Ekboks also has Gears of War, still won't have anything on brawl! Whoo.

At least they have a story/adventure mode. It should be fun.

Yep, brawl's definitely going to be the best Wii game.

Ganondorf and Sheik will be playable in SSBB but they will be getting whole new move sets, and it might piss some people off because they'll most probably nerf Sheik.

Yea, you can see up zelda's dress in twilight princess (don't want to spoil by saying when, you'll know), not so pretty though.

It looks so amazing and it even looks like it's going to take some strategy to complete. Looks like koopa troopa might be playable. He's in that pic with fox and he's been added to a lot of other mario games (tennis, m kart, etc).

Xbroke also got a game about a pinata.

I hope they put Ganondorf in the game.

I'm going out on a limb here, but it is betraying metaknight as a bad guy, which makes me think he is the boss in the game and will be an unlockable character when you beat the adventure mode.

Awesome captions, first off. Secondly, that was the best week of updates thus far with no competition to speak of. I can't friggan wait until December 3rd! Halloween? Nah. Thanksgiving? I'll pass. Christmas? Ha. I officially declare December 3rd Brawl Day. A day that we can not only recall the release of a remarkably highly anticipated game for its time, but we can also Brawl each other from dawn to dawn. Dude, that would rule. My post in a nutshell: Awesome update, the game looks better than I even dreamed of it being, and December 3rd is now Brawl Day.

Master Foot that is zelda.

I can't wait to play the adventure mode.

Great (sarcasm) Peach is back.

No, ssbb fan it's peach and zelda.

Seeing Fox in one of the screenshots makes me hope that they improve him, because though he's my favorite character and the one that I think is the best, I still think that they could make him stronger. With all of these new characters, he might not be worth playing if he's not improved. Also, he looks a lot uglier in this game, I wish they'd have kept his Melee face.

With luck this game will use wi-fi multiplayer in adventure mode, would be awesome.

I hope the Subspace Army isn't inspired by the Heartless, they look kind of similar. Kingdom Hearts is a plague to video games and I hate KH.

I like that last picture with Pit. And that girl. He.. Funny..

Can anyone make a plausible guess on what it is with MetaKight? Is he good and just that his ship was stolen by the Minister or is he allied with the Minister? The original Brawl website said MetaKnight was chivalrous and a good guy, yet in most games he has been a villain.

Yes kirby faces meta knight in a lot of games, but he helps kirby a lot too. In kirby's adventure for the nes he threw him items, and in the kirby show meta knight was a good guy. Plus in most games he is either forced to fight kirby or thinks kirby's after something.

Thank you for posting that YoshLee. You're probably right that Metakight is a good guy. I never played the nes game so I had no idea on that though I do remember him throwing his sword to kirby at the beginning of fighting the final boss and the other parts you mentioned. Do you have any theories on how that the ancient minister go Metaknights ship?

Thank you, I like kirby and meta knight so I know a lot about them, but I don't know how the minister got meta knight's ship.

The only theory I can come up with is that Metaknight somehow by accident released the minister and the primid into the Smash Bros World and had his ship taken by force.