The online aspects of Super Smash Bros Brawl mean you will probably want to maintain a list of friends.

As announced today, Brawl will have its own friends list, separate from Wii Friends. This also means it has its own set of friend codes. 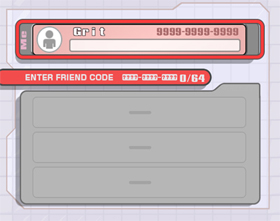 I could really use some friends. 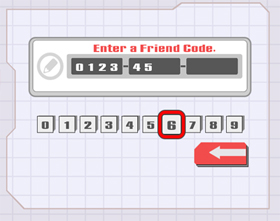 I don't know if this will work, but I'm desperate. 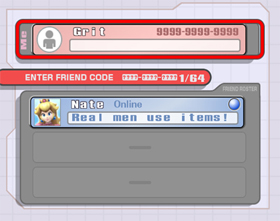 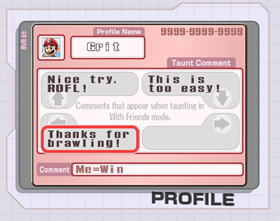 Better win her over with my wit. 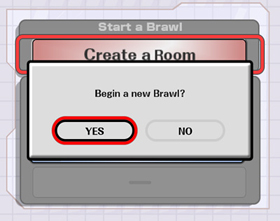 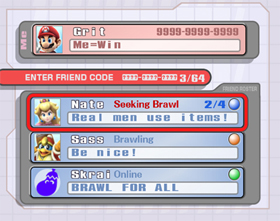 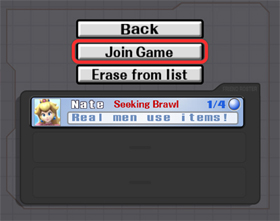 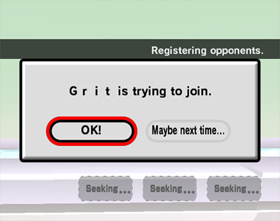 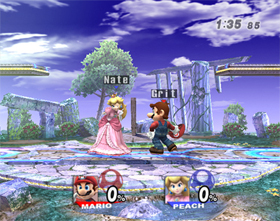 Wait a minute. Is this only on online or the real game?

Gah. What the (manually censored out). Even on the original launch date for Super Smash Bros Brawl and they still give us boring information. Enough is enough. The players don't want thin slices of baloney to nibble on, no, we want thick slabs of steak we can sink our teeth into. We want character confirmation, new stages (the Melee stage was nice but I wished they showed more then one or go in-depth into one), possibly music, and most importantly we want info on the subspace army (more character introduction videos, bosses and gameplay).

Wow! Brawl is really cracking out the game modes! They better change it before I expect what the next update is.

Wow Nintendo, you managed to ruin my day again, instead of getting smash bros today you post this update, this is sad! Give us an actual good update for not getting our smash fix.

I was expecting something huge. A great new update that would bring back the interest in Brawl. Why? Because today was the original release date in US. It really sucks when they don't put at least a decent update for holidays and special days (Halloween & Thanksgiving updates blowed).

Why can't Nintendo games on the Nintendo system use the same Nintendo friend code? What.

Darn I was hoping for an awesome update on december 3rd. This is worse than the "you must recover" update.

I was expecting something better as brawl was suppose to come out today but it's not too bad. I like how it's separate from normal friends. Cool!

Dammit, why friend codes? This isn't helping safety issues seeing to it that there's no actual means of communication besides taunts. Damn.

Oh my god you guys are acting like it's the end of the world because today's update was lame. There is still 3 months until they release the game, be patient, there are still plenty of updates to come.

Friends codes! Since we can't communicate we should be able to join any match available, or shut some off for clan wars.

I didn't know that the Nintendo staff used leet speak.

Well, there goes the perfect time for Ridley's confirmation.

Ladies and gentleman, if you're into Brawl, then you'd better listen to this: Banjo/Kazooie has been announced as a playable character for Brawl! Here's the low-down: Special: Egg Attack (You can aim where you shoot, and if held in, it becomes a Grenade Egg Attack) Down Special: Beak Buster (If held in, it becomes the Bill Drill, but you are vulnerable when this happens) Side Special: Beak Barge Up Special: Beak Bomb Final Smash (This is ultra bad-ass): Honey Bear Band (Banjo plays his banjo, damaging people, while Kazooie plays her kazoo, healing themselves [Last time I posted something like this I got the two instrument functions confused] and after the music stops, you are rewarded with an extra life, regardless if you KO somebody or not, which makes this the best Final Smash in the game) "The two-pronged attackers, Banjo and Kazooie, save the day, one Brawl match at a time with all-rounded attacks and attributes and the most powerful Final Smash in the game." End quote. My buddy, A. Minister, told me about this. I'm still a tad curious as to what the 'A.' means but I think it's something swell.

This looks a bit complicated. I don't want to have to call up all my friends to ask for their codes.

GRRRRR cm'on Sakurai let us find out about some Final Smashes or maybe a new stage or perhaps character.

Actually, the original US release date was with the Wii. Well that's what I've heard.

Everyone feels like I do. I hate this update it doesn't appeal to me, I just play the game on my own.

Bannipper, nowhere does it confirm any new characters. This A. Minister is most likely making things up for reasons unknown (possibly out of either boredom or just wanting to start problems).

Guys, seriously. Do you not want ANY surprises when the game comes out? You're lucky they gave you any update with your "give an inch take a mile" mentality.

Uhhhh, Bannipper, are you positive you have reliable sources? I mean, we've all seen how smash balls appeared very frequently in E for all demos (I once saw four smash balls in one round). If they gained a life for every final smash that would be crazy. Never in Smash Bros has there been any way to gain an extra life. Also, I have my doubts about Nintendo giving the most powerful final smash to a third-party character.

Does the A stand for Absolutely no proof whatsoever?

Banjo-Kazooie is owned by Rare, Rare is owned by Microsoft. We aren't getting any Rare characters. And guys, don't be so mad about the relatively boring update, Smash was only coming out the 3rd in the US, not everywhere. You're not the most important person in the world.