Some assist trophies in Super Smash Bros. Brawl must be unlocked before you can get them.

Custom Robo
This Ray Mk III starred in the DS game called Custom Robo Arena. When he appears, he likes to throw his weight around robot-style, whizzing around in the air shooting a barrage of bullets. He's also got some bombs loaded up. 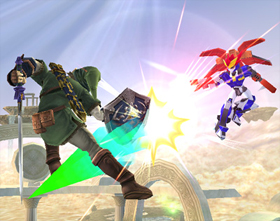 Isaac
Mr Isaac hails from Golden Sun. A sword user at heart, but he also likes to use big hands powered by Psynergy. It's the way of the future. 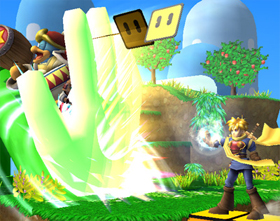 Infantry and tanks
Someone called the cavalry, these units from Advance Wars have a score to settle. Fog of War sucks btw. 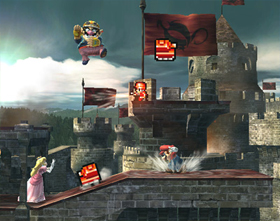 Comin' back after all these years, rat-tat-tat.

Barbara
Barbara has musical aspirations, wailing on her guitar to anyone who'll listen. She originates from games like Daigassou! Band Brothers and Master of Illusion. 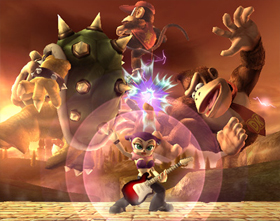 Shadow the Hedgehog
Everyone knows this guy, for better or worse. Shadow brings forth the power of Chaos Control, it can really slow foes down. 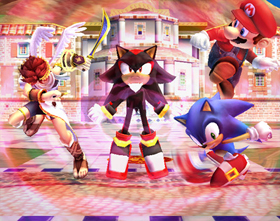 I love the Advance Wars sprites.

Glad they made Isaac an assist trophy at least. In the game the powers Move and Lift look kind of freaky with these huge hands doing whatnot.

Shadow? Wasn't expecting that. Can't wait to get Brawl.

There's another terribly funny Naruto reference. Sadly it does really look like that. Why Shadow, though? I hate it when he's classified as more important of a Sonic character than Tails and Knuckles. And Amy. And who knows how many more. Well, I hope Tails and Knuckles are normal Assist Trophies. They'd better be.

Isaac should have been a playable character.

Don't forget to mention that we were also told Grey Fox's Assist Trophy is also useable when Snake is unlocked.

What! No Tails, no Knuckles?

They should have made Isaac a playable character. Golden Sun kicks ass.

Shadow should have at least been a clone character. The fact that you have to unlock assist trophies is just stupid. It's like unlocking legendary pokemon, but they still have a 1/256 chance of popping out a pokeball.

I see Shadow made it in, cool, this is a great update.

Is there something that is not hidden?

Cool I'm glad they put custom robo as an assist trophy at the least, it would have been cool if he was a playable character. I also wish Isaac was playable. Golden sun was good, even though I never beat the game because I lost it and never found it.

Quartz, in the Green Hill stage, Tails, Knuckles, and Silver are seen running in the background. Why would they be Assist Trophies anyways?

At first, I didn't know what Shadow did. But why couldn't they have made him a clone character? I mean Luigi is BASICALLY a clone of Mario. Shadow could have been a clone Sonic, only slower, stronger, with chaos control as a recovery and chaos blast as a final smash.

Ray mk has been in all the custom robo games. Also, I can't figure out why I don't have issac yet, is there a way to check your progress? I could swear I've gotten to 200.

What I'm an assist trophy? Why don't they make me a real character! Damn you Sonic I'll kill you.

Nope, tails and knuckles aren't assists, but they are normal trophies, along with sonic, super sonic, amy, silver, shadow, blaze, some chao, cream and cheese, and jet the hawk (that's a lotta sonic trophies). No eggman for some reason though.

I have brawl, but it seems that I cannot get the right assist trophy to see Shadow's attack! I have Sonic, but I've been him versus Mario, Luigi, and Peach (they're Nintendo, so it made sense I should have a better chance of getting him). By the way I'm pretty sure Barbara is 50 hidden songs.

Wii Rox, Eggman is a trophy. You have to have 500 different stickers in order to unlock him.

Really? Well I wouldn't know that because I don't own the game. I just saw a video showing Sonic trophies and Eggman wasn't there. Well, glad he is, he should look cool.

Well, there are so many horrible assist trophies {the star from Mario galaxy, Lakita etc}, it's good to see that good ones like Shadow are in.

The luma from Mario Galaxy isn't an assist trophy. There's one that looks kind of like it, but it's something from some old Japanese only game. The trophies are random, it doesn't matter who you fight against. And every character but Sonic and Snake are Nintendo characters, not just the Mario characters.

Aww it would have been cool if Isaac did Ragnaroc or some other awesome psienergy attack.

How are you supposed to unlock shadow? I already have Sonic.

Why of all the fighting games in animal planet it had to be ssbb and here I am stuck in this stupid jar and when they free me they're so upset but at least I stall the opponent or he wouldn't survive.

To get Shadow you need to have Sonic and you have to beat him in a battle, then it should say Shadow has been added to assistant trophies.

When they told me I'd be in the game I thought they meant as a CHARACTER not a trophy. Damn you Nintendo! I'm going to summon Judgment on your asses.

Why does everyone seem to be complaining that 'Nintendo promised this character and that character'. I recall Nintendo slowly revealed the roster and didn't mention squat about who they intended to include beforehand.

I've been hearing that you can unlock naruto as a sticker or a trophy or something. Can you?

Gah! I'm just mad cause Blaze isn't an assist. At least Shadow is! And he IS a more important character than stupid KnuckleHead and Tails.

Which one is gray fox? I don't think I have seen him yet. Maybe. Can someone help?