In Sakurai's third "not bad" update in a row, here's Stafy, another new Assist Trophy in Smash Bros Brawl.

Unknown outside of Japan, apparently Stafy starred (see what I did there) in "Densetsu no Stafy", which I assume is a game.

Stafy is shaped like a star, a fat star. He's capable of a spin attack, but is weak and can also be attacked himself. If you had the choice of Assist Trophies to help you out, he would probably be near last. 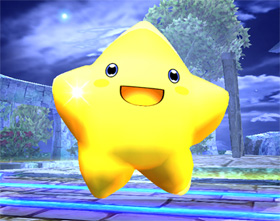 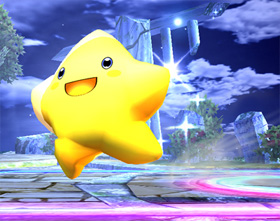 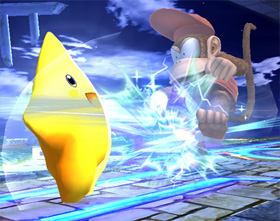 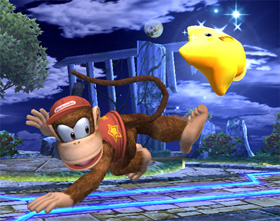 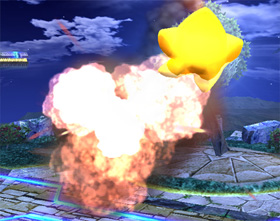 He's a cute little guy, reminds me of those Fish from Mario RPG.

In one of his games wario helped him out. Yes I mean wario from the mario series.

Well this Assist Trophy has been overshadowed by the Waluigi Assist Trophy. Anyone I guess they are adding dud Assist Trophies to balance them out with the Pokeballs.

He's cool as an assist trophy.

He's a cool assist trophy. I saw a poster of him in the game mario and luigi super star saga, but it kind of sucks he can be attacked.

Looks like the guy from super mario galaxy. He is extremely cool, probably one of the best assist trophies.

Hey does he explode, or does he throws fire at you when you attack him?

Um. Yeah. I guess if all of the Assist Trophies were good, it'd give too much advantage to the one using it. I guess this is the Goldeen of the Trophies.

Weird, does he make you explode if you attack him? I can't tell.

It does kind of look like the lumas off of Super Mario Galaxy.

If Stafys existed, I would buy one as a pet.

I've been playing galaxy and I agree on you peach fan but I wonder how you kick butt with him.

These are great captions. I can just imagine him saying them with the voice of a five year old after eating enough sugar to make Willy Wonka look moderate.

He should be a main character.

He is so cute. He really should be a main character.

Stafy is so cute and I too would buy him as a pet if he was real (sigh).

Stafy is sooo cute, I love him.