The standard Brawl mode in Super Smash Bros Brawl is described by Sakurai today. We get our first official look at the character roster, but it's incomplete and doesn't confirm any of the latest rumors. 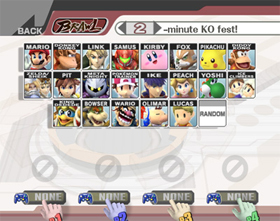 Mario is in this game!

To choose your character, move the little hand onto their square and drop your token onto it. A larger pic of them will appear at the bottom of the screen, from here you can tap them to change colors. On choosing to play as Pokemon Trainer or the Zelda/Sheik duo, you can also pick who you want to start the match as. If you're feeling footloose there's a Random option, but you won't know who your brawler is until the match begins. 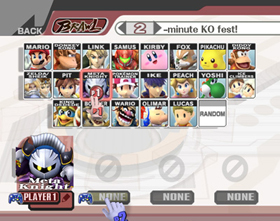 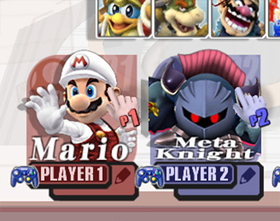 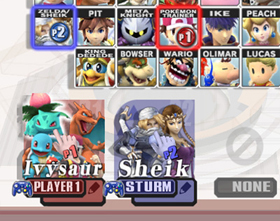 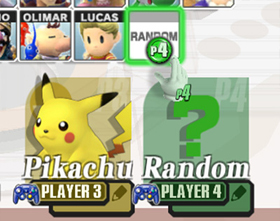 There's a small pencil icon next to your character in case you want to give them a name. You can choose an existing name or register a new one here. 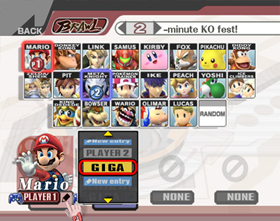 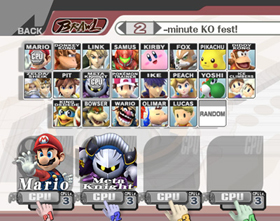 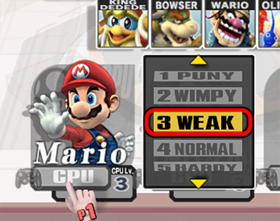 Tapping on the bar above the characters lets you modify the rules of the match. You get a plethora of settings to toy around with, like time limits, items, handicaps and team options. 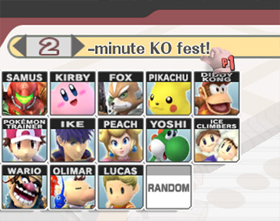 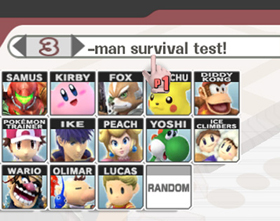 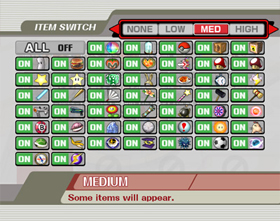 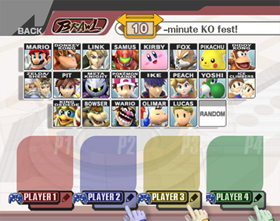 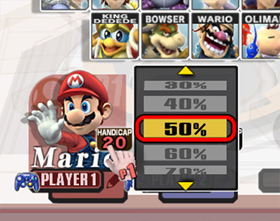 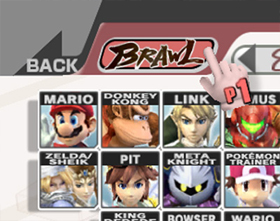 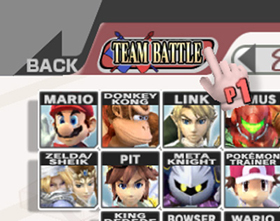 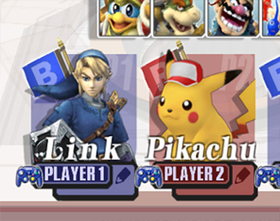 When you're ready to fight, there's only one thing left to do, choose a stage. There's a heap of stages available, including several from the previous game Melee, but not all of them. Of course you can also access custom stages that you've made yourself in the Stage Builder. 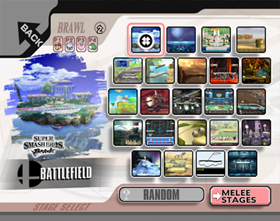 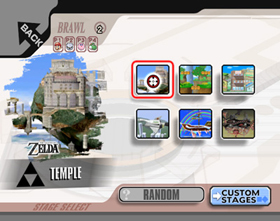 Maybe all of the rumors are UNLOCKABLE.

Looks like we now have the starting roster, everyone that's been released on the Dojo site except for 3rd parties.

Remember, some people in Japan got Brawl earlier than they should have, so we shouldn't know about Ganondorf, Toon Link, R.O.B, Captain Falcon, Luigi, Falco, Ness, Jigglypuff or Lucario. Though we do know, Nintendo isn't going to confirm it.

Yup, I agree with Metaray42. If this is what we've seen out of Brawl, then we've nearly scratched the surface. It was delayed THREE freakin' times! Why? Because they keep adding more stuff! I hope the Japan release will give us loads of info on what to look even more forward to.

See the character selection is not dark the usa deserves all the characters back for one month extra then the game will be fullly complete.

Or they didn't put them on the screen to trick us.

A few items not described in-depth earlier: Exploding crates. Sandbag. Hamburger (though this might represent food). That clock or stopwatch that was coming out of a party ball in an earlier screenshot. A lightning bolt (not confused with Screw Attack, since that appears also). A purple colored target? (in between bob-omb and gooey bomb). A conch shell, no idea how that'll be used. A sun? (between pitfall and Mr Saturn). A jack, shaped like the ones from original Donkey Kong. A very spiky Thwomp? (between jack and soccer ball). Soccer ball (duh!).

But wait. Where's the space for unlockable characters? In Melee there was a tonne. Hopefully the character pictures shrink when you unlock more.

They didn't bring Fourside back? NOOO. But, it may be unlockable I'm hoping.

Maybe this has been explained before, but why are there GameCube controller icons on screen? Do you have the use a GC controller to play?

Have you noticed the stage next to Battlefield? Final Destination is back.

Well they're hardly going to give us all the characters in the rumors all in one go. I guess we'll know tomorrow at any rate.

Well this comfirms the rumors about who's in brawl look at the japanese player screen its the same as this one.

Metaray42 is right, Marth, Game & Watch, Luigi, Falco, Snake, Ganondorf, Lucario, Ness, Sonic, Toon Link, Robot and Captain Falcon are all unlockable. Unity, yes, the spaces do shrink, the final selection screen will have 4 rows (each row has 10 pictures except the last row has 7 counting the "Random Space"). It would seem that no matter what controller you're using it'll show the Gamecube pad. SuperLuigiBros, I don't think that is Final Destination, the Stage next to Battlefield looks like like a floating navy box with neon light blue marking with a red. Something in the middle of the stage, and in the background looks to be a moon.

ZOMG! Mario's in Brawl! Anyhow, what's your guys' thoughts about ROB in Brawl and the possibility of Roy, Mewtwo, Dr. Mario, and Pichu being cut?

Looks like sonic is unlockable. I wonder how you unlock him.

SuperLuigiBros, it seems like you were correct afterall, that is Final Destination. Also another new Stage has surfaced: Pokemon's Spear Pillar. It features Dialge and Palkia in the background.

It looks like they're all using the gc controller.

Snake must be an unlockable character because he is not on the char selection screen.

A guy, here are a few corrections: The "conch shell" is a Deku nut, the lightning bolt is from the Mario Kart franchise (I'm supposing you all know what it does), and the "sun" is a poodooboo (or however you spell that).

Hey Aeth, don't forget about the other three rumors, like Krystal, Mega Man, and Leon. And SemiCoherent, no you don't need a GameCube controller to play brawl. Go on the Dojo and read "How To Play". It'll tell what controllers you can use.

The character picture does get smaller, look at yesterday's new challenger approaching, the pictures are small.

Well, I see Green Hill Zone in there.

I'm going to use this as proof against the supposed screens from Japan. Would there be so much difference in menu backgrouds between the English and Japanese versions? Also, the character names are two lines when necessary, while in those screens, they're all only one. Can we get Nintendo's official word on it, or set-in-stone proof from ye real Japanese game?

What no Super Smash bros. N64 stages, no Jigglypuff, and why is it all with GC controller why show the example with the Wiimote or Classic Controller? They'd better be unlockables.

Plaugefiend, I'm sorry to say but they aren't in, but the game looks good even with them out (Though we don't have Krystal, we do have Wolf at least (though he's kind of like Fox and Falco and his Final Smash is "Red Landmaster").

I see no one noticed a screen Smash Bros. Dojo didn't show: the ITEM SCREEN! Don't know if anyone (other than me) can see what the items are.

Thanks for the corrections, Nintendoof. I don't follow video games that closely, so I have no clue what a Deku nut or a poodooboo is (I do know what the lightning bolts in Kart do though, and I thought it was from there). Anyone know what the "target" is? It's between the bob-omb and gooey bomb. It might just be the new motion-sensor though.

I need to know the difference between vs mode and brawl mode. I can't find out.

A Guy, I know what that purple "target" is, its an updated version of the motion sensor bomb. DOJO just released a complete list of all of the items used in the game yesterday (3/5/06). It is under the items option of the main menu.