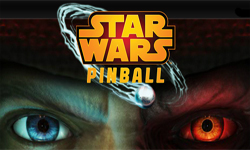 Question marks over Wii U version

An exciting announcement in the world of pinball has just come from Zen Studios, the developers behind the recent Wii U release Zen Pinball 2 and a selection of other games related to the silver ball. It's Star Wars Pinball!

There is a potential fly in the ointment though. The platforms listed for release are:

So that's every platform under the sun... barring Wii U. Zen Studios remain tight-lipped but teaseful (I know that's not a real word) on whether it will happen:

@gregwiggleton The force is strong with Nintendo :)