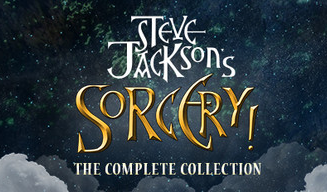 It's a kind of magic

Console players who are fans of wordy story games have a lot to be excited about today...

Embark on an epic quest to recover the stolen Crown of Kings in this four-part adventure, presented for the first time as one complete game. inkle partnered with publisher No Gravity to bring their bestselling adaptation/expansion of Steve Jackson's cult 1980s gamebooks to consoles.

An epic adventure through a land of monsters, traps and magic, where every decision is yours and every choice is remembered. A narrative created from tens of thousands of choices. Battle strange creatures. Cast weird and wonderful spells. Discovers secrets in every corner of an open world.