Did you know stickers aren't just for show in Super Smash Bros. Brawl? Today Sakurai gives us the lowdown on sticker power and its use in the Subspace Emissary.

Each sticker you collect has the capability to boost a character's stats or abilities in some way, a power-up if you will. Clearly some stickers will benefit certain brawlers more than others.

The screen for applying stickers to your fighters looks like a trophy base. Space is limited, so choose wisely. Cram smaller ones into the gaps as much as you can. Stickers that boost the same stat won't stack, meaning only the more powerful one will have an effect.

Stickers can be moved around even after being stuck down, but if you peel one off it's gone for good. As you play through the game you can expect to pick up a number of doubles, so you won't necessarily lose a sticker out of your collection. If you run into a Game Over screen though, half the stickers on your character are gone. Wap wap wap-wap. 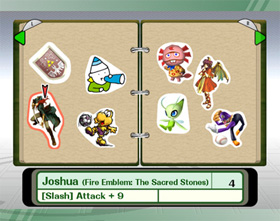 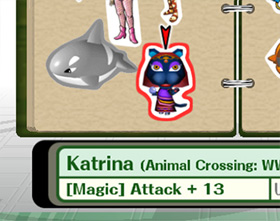 Just what I needed. 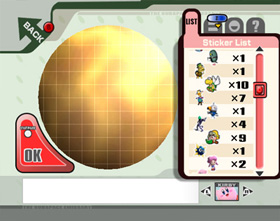 Time to make my mark. 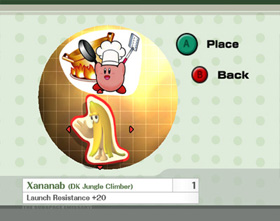 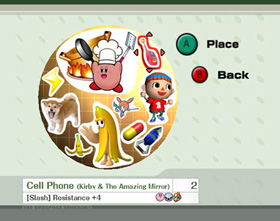 Yea, I always carry my phone to resist slash damage. 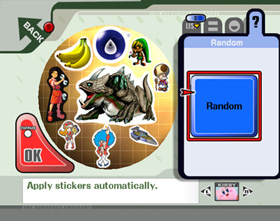 Those bananas get everywhere. 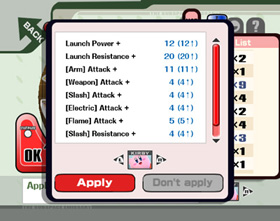 They won't know what hit them. 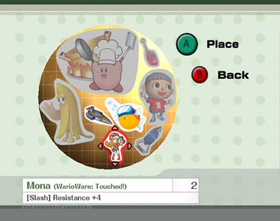 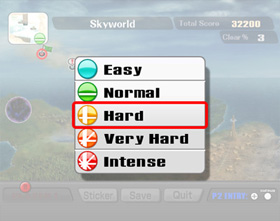 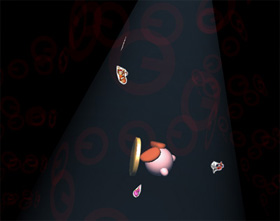 I spent 2 hours sticking those!

I thought this would be another boring update but this did give a lot of unknown info about the elements in this game hey since you can power characters up with stickers doesn't that kind of make it sound like an RPG.

Kind of lame that they won't work on normal brawls. But all the same, it would be uber unfair.

Man I don't like this, it makes you need less skill.

Whoa, I wasn't expecting anything like this at all, this is shear brilliance! Now brawlers will be fighting hand and foot for stickers just to reduce how much they fly back when hit or to increase their damage. Too bad you can't stack, but it's understandable why (People would just stack Launch Resistance (I think that is what they are calling it when you fly back after being hit) and go through the whole SubSpace Emissary without ever being launched off. Too bad you'll lose stickers after losing but with the right stickers that shouldn't really be a problem. Never thought those placement skills when you were a 1st grader putting the most stickers on your notebook would come in handy.

Sweet; an RPG element to gameplay.

Interesting concept to use them.

This is amazing Sakurai is indeed thinking of anything right? Did you really expect this? This will add a RPGish feel to it, I mean, using power ups for attack, magic and stuff.

Interesting, so Nintendo isn't relying on people's OCD to try to collect stickers. Well, at least I won't (completely) waste my time collecting them.

That was some useful information. But I'm sort of surprised that stickers are useful. What's next, every trophy you get will be an assist trophy?

The updates are getting out of the "sonic slump" lately.

Stickers, stickers everywhere, but not a pile that works.

Please, no more updates unless it's about delays because I don't want everything given away.

A little confusing but awesome.

Smash fan x, the magic thing might be for Zelda who's a magic user.

I combine my Raikou and Zapdos stickers for a combined +70% to my Ligtning elemental attack. I use Sonic sticker for +10 speed and Magneton sticker for magnetic field special effect. Metal Mario is toast.

Wait a second, look at the second screenshot, there is some sort of shape in the bottom right corner. Also, from the rumor about Lucario, Jigglypuff, and Ness, we found out that in that area is where applicable character icons are found. This means only one thing: there is an Animal Crossing character in Brawl.

Master Foot, you can't combine sticker powers! Only the most powerful Sticker will count. The Sonic Sticker might just be for Sonic. MeleeBrawler, it looks to be just a "U", nothing to panic about, also which Animal Crossing character is there that can fight?