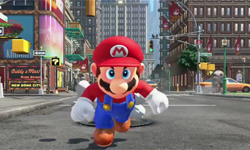 It's an exciting time to be a Nintendo fan! On March 3rd, 2017 Big N will do a worldwide release of their new machine: Switch - so called because it switches between being a home console and something you can take on the move.

A number of games have already been announced, but here's a look at Super Mario Odyssey: