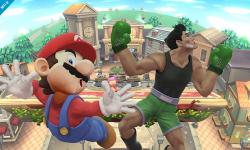 Leaker was an employee of Nintendo of America

As we reported yesterday, a number of videos for the upcoming Super Smash Bros. game leaked online and revealed numerous new characters such as Duck Hunt Dog and Shulk. Since then many people have asked, "Who posted them?". Well, it seems Nintendo has already gotten their hands on the leaker.

On the recent NeoGaf thread entitled "Super Smash Bros. for 3DS & Wii U Thread XIII: Leak Dynasty," a post by LiamR claims that one of his anonymous sources has confirmed that the leak came from an employee of Nintendo of America. Needless to say Nintendo was not thrilled with one of their workers giving fans a sneak peek. Not surprisingly, the individual has already been fired and is looking at a possible lawsuit.

I have a source that has just informed me that Nintendo have identified the leaker. He has been fired and is being sued. He does not work at ESRB itself. He was an employee of NoA, who was sending materials to the ESRB. This is a completely internal leak.

LiamR also states in his post that the recently unemployed worker still has in his possession a final build version of the game. However, he suggests that the individual won't be leaking any more content.

The leaker, despite having been fired, still has a copy of the Smash Bros 3DS game in his possession; as well as one of the 3DS systems used for internal ratings. Nintendo has yet to seize these from him. It's a copy of the final build of the game. If there is more to be unlocked in the game, such as new characters, it is possible we'll see more from him (if he still cares to share it); given that he still has it. I doubt it though.

While the recent leaks have brought joy to many of us these past 48 hours, the leaker is going home jobless with an impending lawsuit. After everything is said and done, the question I would ask him is, "Was it worth it?".

I'm thinking no, it probably wasn't worth it! I imagine Nintendo's a pretty cool place to work.