Sakurai's feeling festive and has given us a reasonable update: Sonic's final smash in Super Smash Bros Brawl.

As you might expect, Sonic uses the chaos emeralds' powers to go Super Sonic, at which point he turns yellow and races through the air at breakneck speeds. 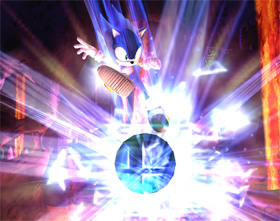 Awesome radical to the max dudes! 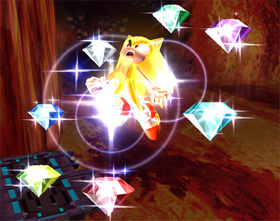 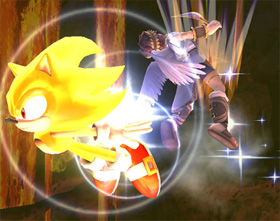 You can't do this, I'm holy and stuff. 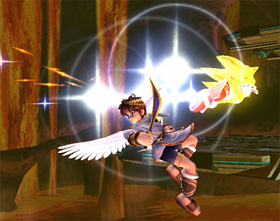 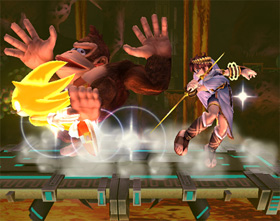 Seize him you ape. 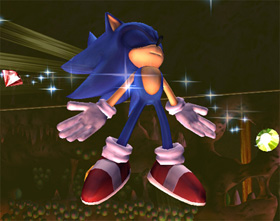 You've had your fun.

Not only this, but there's a Sonic theme track thrown in as well. It's called Angel Island Zone and is taken from Sonic the Hedgehog 3, the game where Knuckles first appeared. Is that a hint that Knuckles might be joining the Brawl too?

I already knew about this. He could've done better.

Does this mean Sonic can call the angel island zone his home stage?

Hmmm. Knuckles? An opposite of Sonic? Maybe.

Sweet stuff but I hope they will consider knuckles and shadow if they already haven't.

Didn't expect Super Sonic to be like this. Oh well. Better than Tails attacking you or something!

Interesting that they chose a Sonic 3 song (especially since that soundtrack was made by us Americans!). I would've preferred a more traditional Sonic song from the first game, but I like Sonic 3 too. I also noticed that the end of the song posted changes to the second level song in Sonic 3.

I can't wait to use sonic in ssbb.

Knuckles could most likely be an AT in Brawl. Who knows? That would be interesting to see. As for the Final Smash, this is my favorite out of all of them. Second being to Giga Bowser.

Saw it coming a mile away, but sweet nonetheless. Now, if Knuckles were to be in Brawl, I'd go nuts; I always liked him best.

Cool, he kind of looks like he's gone super sayian.

This is just like Pikachu's final smash. Oh dear.

Pretty update we already knew this was going to be his final smash but nonetheless nice.

Now Knuckles would actually be good in brawl.

I knew it would be Super Sonic.

His final smash is like pikachu's only there are obstacles. Pikachu's let you go through anything and it seems extremely hard to hit anyone. I prefer this one over pikachu's. It's kind of like if mario got a star and flew around.

I knew it, now what is Snake's.

Jskrdude, originally Knuckles only appears in "Sonic 2" if you had it attached with "Sonic & Knuckles" in the old Sega Consoles. When they brought the games over to the Wii's Virtual Console and "Sonic Collections" they programmed using Knuckles as an option. Other than that, Knuckles' official appearance was in "Sonic 3". As for what could be Sonic's Assist Trophy, I think it'll be Tails just because he appeared in every single game Sonic was in (Knuckles would be third, but if we're lucky they might include both Tails and Knuckles due to their popularity).

Yeah, that was pretty obvious. I actually saw it a long time ago in a video back when Sonic was just announced. Sweet update.

We all knew this from that sonic video.

That one guy said:

The pictures make it look weak and easy to dodge.

Sonic should have a slight colour change where he can look like Shadow, since there is a possibility now that Wario has a clothes change.

They need Silver in this, it would be awesome flying around, walking through stuff, blowing stuff off you with this spiraling blast. If Shadow was in it he could do chaos blast and chaos control. He could ride around on his motorcycle, using weapons, stealing chaos emeralds from sonic. Metal Sonic could use any Sonic characters final smash, fly in the air, slash while grinding (if possible). Knuckles could do a flare punch, for his final smash there could be the master chaos emerald if anybody comes near it he will pulverize them all. If Jet was in the game he could ride on his air board and use all his abilities in SR. For his final smash he could ride with his team and destroy the whole city. They could also give Sonic his items in SA2b and his ring from SatSotR.

Wow, noneyaBswax. Giddy much? I wonder how many people can decipher SatSotR. Anyhow, if any more Sonic characters were to appear in Brawl, I'd agree with Aeth with Tail being an Assist, and Knuckles - though I'd rather him be a usable character. However, if Nintendo were to make another Sonic character playable, odds are it'd be Shadow, just because doubles were so popular in Melee.

Sakurai said that there will only be three 3rd party characters.

DragonFoxCoon, nobody really like the clones. They are just cheap copies of the original character, only with different moves sets, weight class, and strength differences.

If Nintendo decides to make another Sonic character in Brawl, it'll be Tails. He's Sonic's BFF since game 2, I'm sure he gets some credit for that, no? AND he couldn't possibly be a clone.

Knuckles is my favorite video game character period. If he were to be in brawl I would pee my pants.

Knuckles, tails, and silver appear in the background of sonic's stage:Green Hill Zone. Shadow is an unlockable assist trophy. You pretty much unlock everything about sonic when you unlock him.

I posted that a long time ago, ssbbfanboyXD. But, I didn't know Silver appeared.

Super sonic has been out since the first sonic, ya know collect all the emeralds?

I'd have liked something from maybe sonic heroes, or possible adventure 2 battle. And I wish knuckles was a character and I'll bet they'll have a black sonic color so it looks like shadow. They could've done better like used his hurricane thing but it's obvious sonic's got to go super and that's fine with me.