Want to take a look at the subspace army in Super Smash Bros Brawl? Good. These are the enemies in the Subspace Emissary storyline for the single player experience.

Led by the Ancient Minister, the army is mostly made up of creatures called the Primid. Their goal is to cut the world apart and carry it off into subspace. They do this by blowing pieces of it up with subspace bombs. 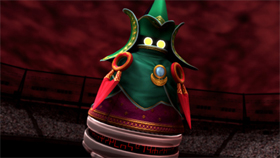 The Ancient Minister (aka Orko from He-Man) 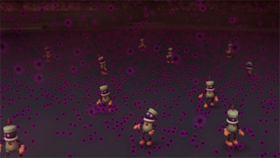 Daaah where am I? 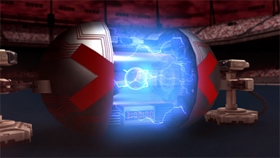 R.O.B's working for the weekend. 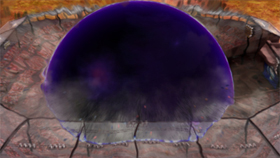 I wonder if master hand is going to appear in brawl. He might be an ally since the subspace army is stealing his world.

I saw the video and that green flying dude looks like an enemy from king of hearts.

Petey pirana in the video.

Master hand will be the boss of classic.

So metaknight is not the last bad guy. The adventure mode is so cool.

R.O.B is a traitor! But what really got me interested is what is the ancient minister doing with meta knight's battleship? Looks like meta knight is a bad guy too, it would be great that somewhere in the storyline The Great Fox battles Battleship Halberd! That would make a great stage too if you think about it.

Oh my god, what's Petey doing in there?

Kirby's going to beat the crap out of the piranha and whoever pulled that cheap shot on Mario. GO KIRBY.

Thank you, EDD. Now, every time I see these guys, I'm going to call them Heartless, and expect Sora to come in and save the day - which he won't.

And that's what Brawl's black hole glitch is going to look like.

No, the Subspace army do not look like the Heartless. They look like someone else. And there is no way that anyone from Kingdom Hearts will ever be in the game. I hate KH.

Petey Piranha might actually be a playable character. This is better than the poke trainer.

Quite an intriguing story for a game like Smash Bros. Needless to say, can't wait to check it out.

Great, another Adventure Mode update and this is better than the previous update, now we know who is "breaking the rules". Though I wonder about how he obtained Meta Knight's ship. Is Meta Knight a bad guy in this story or did the Ancient Minister steal it? Sakuri said Meta Knight was an chivalrous character on the preupdated site.

At least there's a storyline and that it's not just fighting.

I hope the Subspace Army isn't inspired by the Heartless, they look kind of similar. Kingdom Hearts is a plague to video games and I hate KH.

Wait a minute, R.O.B from StarFox? Why is he working for them?

Seems a lot like the twilight zone in LoZ:TP to me, only cooler and not as weird and gray.

SSBB needs to get rid of master hand, he was way overused, especially in the n64 smash bros.

I don't believe Metaknight is a bad guy, maybe the subspace army hijacked the halberd and used it to frame Metaknight.

I hated what the Ancient Minister (and I mean his ship) did to Mario in that movie. But ya know, I had a weird feeling that Petey was going to make some kind of appearance. And Sonic Phantom, that's a different R.O.B. Remember the R.O.B that was unlockable in Mario Kart DS? That's the R.O.B I'm talking about.

Master Hand should/will always stay. He's a representative of the ssb game. Meta-Knight is obviously being used by that minister thing. Com'on use common sense people, these things are obvious when you just think about it. This will be all the characters coming together and fighting this powerful new evil. I wonder why nobody is excited about the cool looking Petey Piranha! Nonetheless, this will be the game of the year. Forever.

The Petey piranha could be playable but don't totally get your hopes up, and if he is I'll still beat him with Kirby.

I wonder if yoshi and kirby will team up in this game, that would be awesome.

I bet Metaknight's opening cutscene for adventure mode might involve him losing his ship.

What happens if you do adventure mode with peach? Will a different color peach get locked? Same with zelda.

I have seen this movie and combined with other movies I have seen (mainly Meta Knight jumping off of the top of his ship -the Halberd- and attacking the characters that were already shown) I get the impression that Meta IS allied with the Emissaries. But we all know Meta to always be looking out for the good of the world, so maybe he later joins up with the others to fight the Minister. I also get the feeling that there will not be an adventure mode for each character, but there will be ONE adventure, and every now and then you play as a different character. Just a hunch.

Those are not Meta Knight's eyes.

The Minister's are round, MetaKnight's are ovals. What bothers me is I can't tell if MetaKnight is allied with the Subspace army. The creatures attacking MetaKnight didn't look like the other Primus (of course neither did the ones attacking Pit). Can anybody make a guess on what those were other than a different type Subspace troop?

I loved this video. I was shocked to see Petey in there, I wonder how he got involved & the whole R.O.B thing shocked me too. I can't wait to see more videos explaining more, like who shot the cannon.

This was an awesome video I was shocked to see Petey in there I wonder how he got involved I can't wait to see more videos.

Who ever did shoot that cannon first of all has very good aim and secondly will get beaten the crap out of by mario if kirby hasn't got to him by then.

The canon shooter was Petey himself. From his mouth. If you slow the vid down you see it was him. Also, I don't believe this will be one adventure using ALL the characters, mainly because that will probably take more than 5 hours to beat. It's better all around for being an "Adventure Mode" and depending on who you pick you will see the adventure from their point of view.

I am very interested in these "subspacians" and the ancient minister. I personally think meta knight is being used (tricked to being on the wrong side). It's not like it hasn't happened before.

I think Meta Knight's ship got stolen by the subspace army. I think if you pick to fight as kirby earlier, then mario stays & kirby meets pit.

The master hand IS in brawl, but gets destroyed by tab. I mean the ancient minister.

I like the bit when Kirby thrashes the subspace gunship.