Time to learn about Falco Lombardi and his moves in Super Smash Bros Brawl, from the official Dojo update.

Falco originates from the Star Fox games, he's a pilot. If you like jumping, Falco's got the best jump around. He also like firing his blaster. His moves however have changed a great deal since his appearance in Melee. 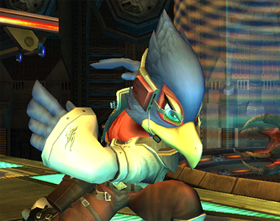 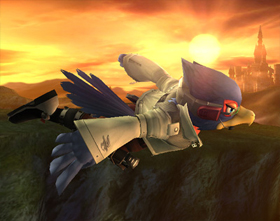 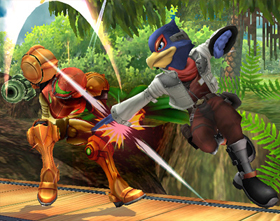 I'm not afraid of technology. 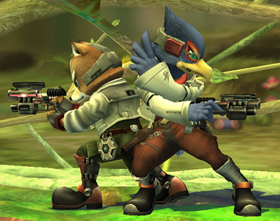 How to unlock Falco: 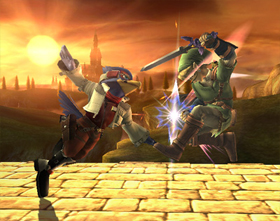 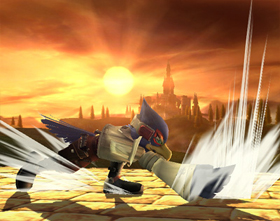 All this dust is bad for my asthma. 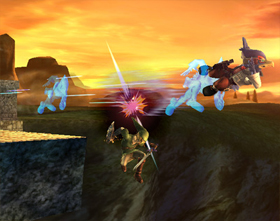 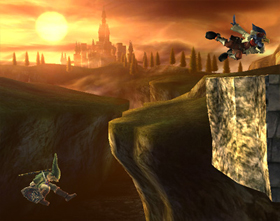 Down special move: Reflector
The reflector does what it says on the tin, reflects projectiles. You can also kick it towards your opponent and make an attack of it, but it's not all that strong. 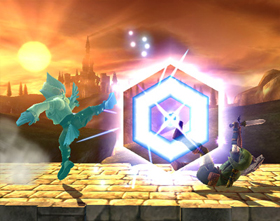 Final smash: Landmaster
Falco's Landmaster handles a little more clumsily than Fox's, it's also less powerful. On the other hand, it can fly, so pick up some foes and get ready for blast off. 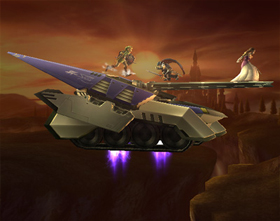 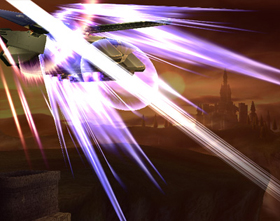 Next stop, the Lylat system.

Nice 2nd caption, also I'm glad that falco's been luigified even further this time around (exept for the FS ofcourse).

Falco is better than he was in Melee.

I agree with Falco in Caption 5. Stop winning the Poll and let Kirby win. KIRBY FTW. Okay, enough about that, apparently Falco isn't as much as a Fox clone as we thought he was. However they still have some moves which are similiar, thye just perform it differently. I think it's just hilarious that Falco will now just be slamming Brawlers through the top of the screen, much more efficiant then blasting them off the stage.

Yes, link, stop winning the poll because Ganondorf is so obviously better.

I've always liked Falco I don't know about anybody else.

Falco is just so awesome, he's my on my top-five favorite brawlers list (Sonic, Falco, Fox, Ike, Wolf, not in that order). Great captions, by the way.

In the 2nd picture is Falco gliding? I hope so. He could be like meta knight. Or other gliding characters.

He is not a clone after all?

Falco rocks and I hope we get more characters in brawl than Japan.

YAAAAY he's been changed around!

Well, at least they tried to change his moves a little bit. But it doesn't look that different.

Couln't Falco at least have had a different final smash? Seriously it's just another clone.

I wish Falco wasn't a clone.

Falco needs the arwing. It would would be kind of like his landmaster but it doesn't touch the ground and can fly better.

Cool but I don't like it how fox, falco and wolf have the same smash. Still I'm glad he's not a complete clone.

Yay, flying landmaster! Falco's landmaster may not be as powerful as Fox's, but since Falco's can fly upward, he can just take practically everyone off the screen. I can hardly wait for march 9th to come.

Falco = Clone, you did the math wrong.

Falco and Fox were ridiculously cheap in Melee.

Falco is the bird! And it's funny to learn what Falco has to do when he has the smash ball.

Falco isn't that much of a clone.

Honestly I have to say falco's different enough. Can everyone quit saying Nintendo promised no clones. Nintendo never said they wouldn't take out clones, in fact they probably could have changed the clones if everyone had quit whining about the delays and gave them some more time.

Falco is cool but wolf is cooler. I mean have you seen and heard his howl, it's just the best taunt ever.

I like how he is less of a clone than he was in melee. However, I thought Falco would use an arwing instead of a Landmaster. Oh well, it's better than no final smash for Falco, right?

Insultman911, you mean glide? I'm not too sure, he can jump really high though. If the rumor is right about downloading content from WiiWare, then that opens the door again because now any character, stage, music, and anything else Nintendo wants in Brawl can be added through there. Falco's Landmaster stinks driving on the ground but is pretty fast in the air (thus you can smash other Brawlers into the roof KO without giving them a chance to jump off).

Hey, Falco isn't a clone. I used to hate him and think he was a clone too, but now he's one of my best characters, next to Marth and Jigglypuff. He handles differently than Fox, and now I don't see a problem with "some" similar characters. (Toon Link should have been different though. And Ganon could use some adjustments). But he better have gliding skills. He's a falcon.

Juan, you're crazy. I have seen him in Melee and he's definitely a clone there. Here, supersmashdodo is right, he's only sort of a clone.

The 5th caption would totally screw up if link dropped lower than falco.

Aeth your right I do mean glide my bad.

No I don't think the second picture is of Falco flying. It looks like he did that dash move in midair. I don't think he can fly with all that technology on, ya know.

I actually don't care what anybody says, I'm sick with Falco and that's that.

I seriously loved Falco in Melee but in Brawl, I seriously hate how his Side A is his arms. I'm just used to seeing Falco use his legs as side A, and his Down B is seriously hard to reflect projectiles. Online is laggy.

I think he's better in Brawl than Melee. If you understand his moves that is, which would take some time to truly master. Just to let you guys know, I'm not that great with Falco, I like Wolf and Fox more.