Ganondorf is a demon emperor from the Legend of Zelda games. Formerly a king of thieves, you can bet he's up to no good. He's a real weighty opponent, and Sakurai wants to tell us all about his moves in Super Smash Bros. Brawl. 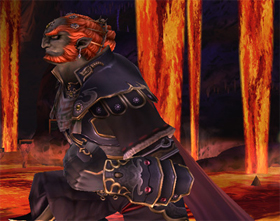 I can't even find anything worth stealing. 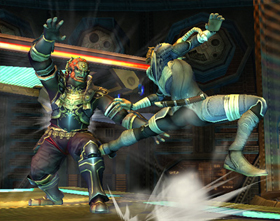 Wait! We could be friends. 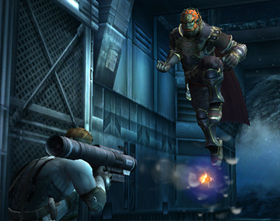 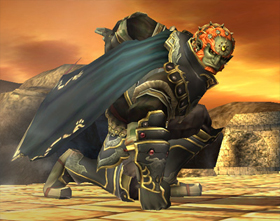 I swear to fight for what is wrong. 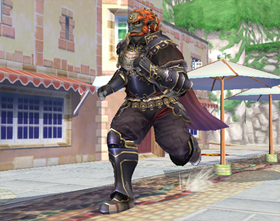 [Hey! That guy stole a banana!] 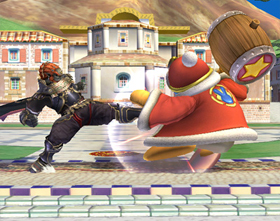 I don't believe in Santa Claus. 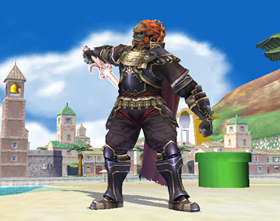 Ehehe, these pants are itchy. 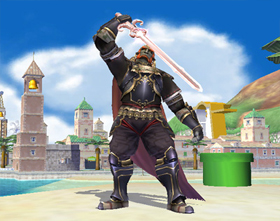 Side special move: Flame Choke
Being choked and burned at the same time is a bad experience. I don't recommend it to anyone. 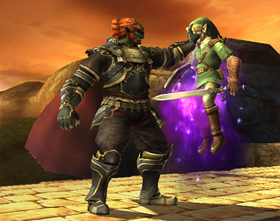 Use the force, Luke! 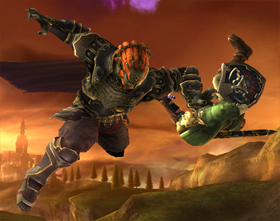 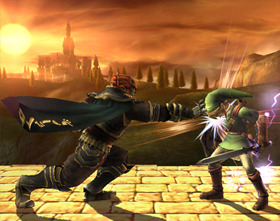 Up special move: Dark Dive
The purple flame effect is known as "Darkness", stickers can be used to boost this. 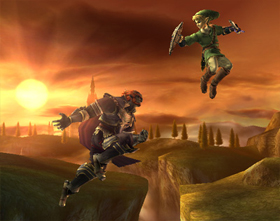 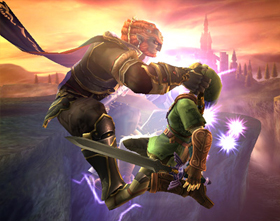 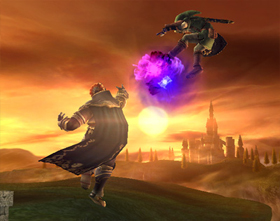 Final Smash: Beast Ganon
For his deadliest move, Ganon turns into a huge beast form of himself. It looks something like Giga Bowser. 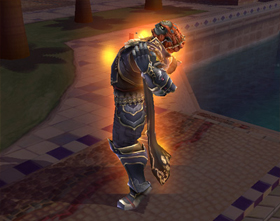 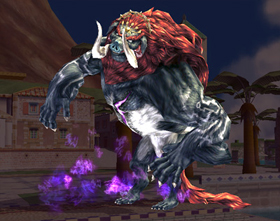 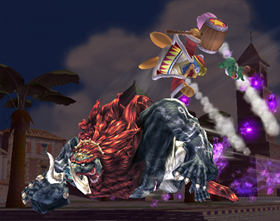 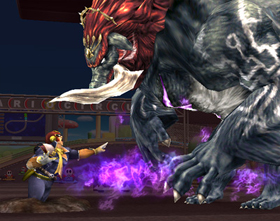 Unfortunately, I've found that brawl Ganondorf is one of the slowest characters in the game. He can't jump too high also.

Already figured out his moves, but nice.

Once again, he's a somewhat clone of Captain Falcon. Why can't they give him a different moveset?

He should use the sword. Dear god, I have to face that thing in Zelda? I'm scared.

Man, even on his Dojo announcement they explain the issue with him not using his sword. If they knew the controversy about him using his sword then why did they not let him use it?

On the dojo they even referenced that he SHOULD be using that freakin' sword of his.

Ganondorf sucks. After beating my friend online 6 times in a row with different characters (he was using Pit), I decided to use Ganondorf because I knew I would lose, and right before the end of the match I was about to lose and I lost my connection to him. My game didn't want me to lose!

Got 'im. One of the biggest jerk-offs in gaming (he tried to kill Zelda AND Midna!).

That sprite is Serpent From Megaman ZX. Awesome game. And Ganon does seem slow, but that doesn't stop him from pwning online if used right.

He doesn't look as good in this as he did in ssbm.

I do agree it's stupid Ganondorf can't use his sword, it's even stupider it's in one of his taunts but not his moves.

Wowza' he looks like Ganondorf from Melee on crack who decided to shave his beard and put on perms.

Nova is right that he is extremely slow, his dash is a jog for pete's sake and he is still cloneish. However despite this he makes up for it in power and ferocity.

I'm glad it's his tp look, but why no sword? At least he is darker than he was in melee, you know, crushing your throat/face.

Ganondorf completely whoops ass in Brawl! He's probably my second favorite character right now, which is a surprise to me because I never used him in Melee. Just because you are bad with him doesn't mean he sucks; I kick ass with him. And don't you think there are enough sword users in Brawl already?

I think it's a tease he can't use his sword. He is scary looking in the movie, I almost had to look away. He's a clone again but I love his final smash.

They should let him switch between his sword and his fists for his standarrd moves by pressing down on the taunt pads.

He may be slow but thankfully his run is slightly faster than Jigglypuff's.

He is actually pretty powerful if you learn to use him (and get over his lack of speed).

Has anyone else found the Snake and Ganondorf combo in Home-Run contest? A friend and I found it just a few days ago.

I smell a clone.

I think it's ironic that one of his taunts is to show his sword, it's like sakurai is taunting us with it.

Can anyone tell me who or what SkullHydra is? I used that name 20 years ago for a Metal band I was in. I was surfing to see if the name had been used by anyone else.

I so wish that he could use his sword! I love being characters who have magic powers (as you can see from my name).

He was much faster in melee, which is why he was one of the best characters, but now they evened things out I use him sparingly.

Ganon is pretty slow but he makes up for it in power. He has only 2 flaws. 1. Can't use his beastly sword! 2. Never get enough time to use his dark dive.

Hi guys. I'm a very good smash player. A lot of people said that ganondorf sucks. I can guarantee you that ganondorf is a good character. It's just a timing question. It's true that you receive more dammage with it. But you only have to bring the other character up to 40% and then, corner it. If you are a good player you know how to time your attacks. So if you think that ganon sucks, then you suck. Simple as that.