As you may already know, the mansion first seen in Luigi's Mansion is a playable stage in Super Smash Bros Brawl.

This creepy place is no ordinary mansion, if you hit the pillars parts of it will come crashing down. You can level the whole thing, but after a while the spirits will rebuild.

To unlock the mansion you just have to play as Luigi in three brawls. 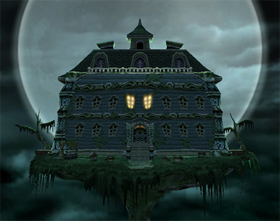 They're creepy and they're kooky. 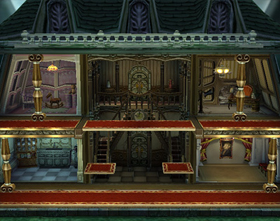 The world is yours. 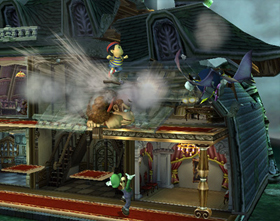 ZOMG NESS! Next time we're fighting at your place. 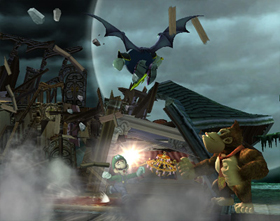 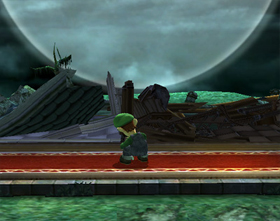 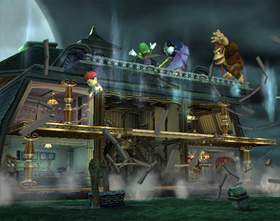 Good "Addams Family" reference in the first pic. Well like you said earlier, I did know about this stage, but nevertheless it's still interesting. Though the stage structure (and destruction) idea is interesting, it would have still been nice if they had a few ghosts fly in the background or it was the ghosts which rebuilt the mansion every time. Also I'm not too sure how many have listened to the music, but the Luigi's Mansion music fits this stage perfectly.

Goood 3rd caption & one of my favorite stages thus far.

That's cool, but I think I have a cooler mansion idea that I'm going to make in stage builder.

I think it should be bigger. I mean, in the real game there's like 60 rooms, a backyard, and a roof.

I love this stage. I felt so bad for Luigi when his stage was destroyed.

Luigi's Mansion was a FANTASTIC game. This level does not do it any justice. Imagine if you could explore the whole house while still fighting in a 2D fashion? Awesome.

TruBlu, yeah! There could be a room where king boo in bowser's body attacks anyone who comes near. This stage should be on a hyrule temple/new pork city scale.

Alright time to tear some houses down with brawl. This just rocks. Poor Luigi, his house being knocked down to the ground. If that was my house I'd sue Nintendo. Just kidding.

The last caption had me on the floor! Good Simpsons reference! It's also one of my own catchphrases.

I'm a bit disappointed. I thought there would be ghosts and all 4-5 floors, this is way, WAY too small. It could've been on the roof where he faced Bowser, and the pillars are like the walls in Shadow Moses Island, and/or you could climb on the two huge chimneys with ladders. I'm with insultman911, I think I'll make my own Luigi's Mansion stage in Stage Builder and do this great game some justice. By the way, this mansion was basically an illusion made by the Boos. He got his own real mansion once he beat the game.

This stage is awesome. I think I'll go on this stage the most. And thanks for the Luigi Final Smash info Aeth.

TruBlu, I couldn't come up with a better idea. That would be fabulous and I truly agree how the stage does no justice to the game. It was arguably the best game on gamecube along with melee, sunshine, metroid prime and windwaker.

I'm with frogman, and TruBlu Luigi's mansion was an awesome game. It would have been better if the stage side scrolled like the rainbow cruise, they could have had several of the boss ghosts from the game attack random players on the stage too.

For my mansion stage idea, I'm going to put a front yard, a main floor, a basement (it might not fit), 4 floors (including the main floor) with ladder usage, an attic and finally a rooftop, where the main brawl is going to be. It's great because it might be fun pushing people off the rooftop and having them fall 4 stories, making them have to climb back up again and A Guy good luck with your Luigis Mansion Stage. Be sure to make different floors.

This game is the bomb. I love Luigi's mansion so much.

I think they could've spared one of Luigi's melee attacks for poltergust 3000 move. I mean sheesh Mario got the F.L.U.D.D. and that wasn't even that popular of a game. I also think they should've incorporated ghosts.