There's a wacky new stage in Super Smash Bros Brawl based on the world of WarioWare. Wa-haaa!

WarioWare is famed for micro-games that last only 5 seconds, this is incorporated into the stage's gameplay during battle. 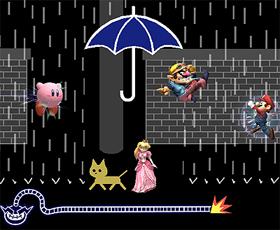 Doesn't Peach have her own umbrella? 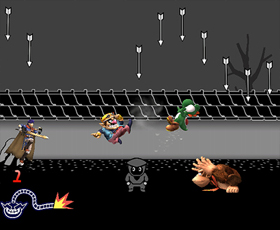 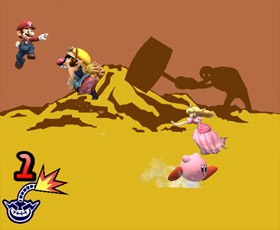 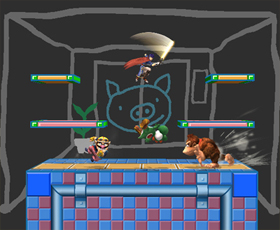 It's been three weeks since they had a new stage, but did they take off mr G&w for wario?

That's one of favorite games. I won't play as wario but I will play on that stage!

The battle will only last for 5 secounds?

About time they put a good update this week. All the other ones were not very interesting.

First off, Pichu Fan, G&W wasn't that good. I only know one person who's good with him. Wiiplayer, each mini game on the stage will be five seconds, not the entire battle. Anyway, the stage looks pretty fun.

WAIT I KNOW! Each time the bomb is blown, they change the stage a little. See in the first pic, the point is to not get wet, just like in the minigames? The second, you have to dodge those stick thingys. Again it changes when 5 seconds is up. The last one has no fuse, and that's the normal battlefield.

No I Think That there will be a series of mini stage connected together and after 5 seconds you go to the next one. Umm is it just my computer or is the update on the site, not on us english page?

I like this stage. It reminds me of some old games. It's not just all of the new stages. They mix up some old ones too.

Looks interesting. I'd like to see footage of it to see how it works though.

I would guess the battle goes on, then every so often there is a 5 second minigame that causes massive damage to people who can't react.

This looks like it's the most original (and funnest) stage of the entire series.

Now I know why they call it cazy warioware.

Wiiplayer, the background changes every five seconds, not the battle. This looks like a very weird/fun stage.

NO the battle doesn't last 5 seconds, it's like every so often a mini game or something will appear. These stages all look kind of boring, they need more from the ZELDAISH type level, that one's cool.

This is a funny looking place.

Definitely not a stage for real battles, but maybe party battles or to test your ability to "spontaneously" fight.

This is just what I want to see more of in Brawl: pure and utter CHAOS! I wonder how many different microgames have been incorporated into this stage?

Yay you can play micro games while you play.

Each microgame lasts 5 seconds, they go through many microgames.

I think it means something happens every 5 seconds, like the arrow thing wiiplayer.

I wonder if those are the only microgames.

I want another huge stage like Hyrule. Just huge and vast, that (and Final Destination) is where the REAL battles are fought.

Be cool if there was a challenge mode and you had say, 4 lives and have to survive, and if you get hit you have really high chance of falling off. That's really likely.