Wario shakes up a 2D platformer

Some early screens suggest that the previously announced Wii title Wario Land: The Shake Dimension is to be a 2D platformer. 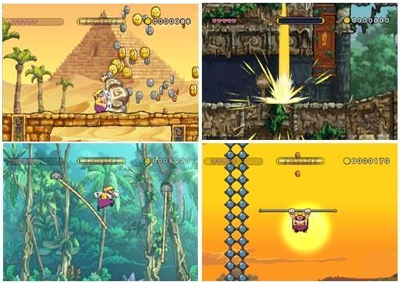 The game will have you holding the Wiimote sideways to control Wario in a traditional way, but as the name suggests, shaking moves will be made too. Cut-scenes will help push the story along.

Wouldn't this be better suited to WiiWare than a full blown disc release?

It will probably be wiiware.

I agree it should be a wiiware game.

Well, if they can make the game as long, as polished, and (not necessarily innovative) as fun as Super Paper Mario, I don't see a need to make it a WiiWare game. This could be the surprise of the year.

Yeah, most definitely! But Super Paper Mario was a full-blown Wii disc release. And it wasn't even that fun in my opinion.

Perfect baby, I only wish Waluigi would shine though, mmm haven't seen one of these since Wario Land 4.

Looks alright. Most wario land games are fun so I think I'll be getting this, especially since it seems to have a new use of the wiimote.

This is an automatic yes for me.

Well. Some of us can't use Wiiware, like me. SO PUT IT ON A DISC BABY! XD.

This should've been for DS.

Perfect, if it outdoes Virtual Boy Wario Land and Wario Land the original I'll be impressed.

I agree, this game would better suit WiiWare or perhaps the DS. There is no way I'd pay usual Wii game price for a 2D platformer.

Probably but what would be even more awesome and lucrative is they would combine warioware games and wario world games together.

I agree that it would be better as a WiiWare title.

From THOSE screenies, this looks really bad (graphically).

Is wario land like wario world? That was fun.

Have any of you played Wario: Master of Disguise for the DS? It looks just like this! The coin system is back too.

If it's anything like Master of Disguise, I'm not touching it.

X-Play's "Wtf" characters: Waluigi, Birdo, and Daisy. I mean, they're just there as extras, just like Blooper and Hammer Bro on Mario Party 8. Don't need a game. Just need to appear as back-up.