If you've been wondering where Waldo was, it turns out he's been hard at work on a new video game for Wii, DS and PC. Where's Waldo? The Fantastic Journey is being published by Ubisoft and is said to be an interactive adventure for the whole family. 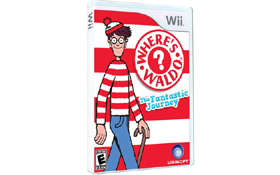 Where's Waldo? has been a cultural phenomenon for over 20 years, with fans of all ages on the hunt for the elusive world traveler in the red-and-white striped shirt and hat. We are looking forward to bringing an interactive Where's Waldo? adventure to fans of the highly-acclaimed book series and introducing an entirely new generation to the pop culture icon.

In addition to finding Waldo in the standard way, there will also be a multiplayer mode where you face off against another person, grabbing power-ups along the way to help yourself and hinder them:

Where's Waldo? The Fantastic Journey will be hitting US shelves sometime in September. A screenshot or two are up now.

They're making a where's waldo movie.