It seems like Crash Bandicoot is set to make his Wii debut in a new game called Crash of the Titans. Said to be a Nintendo exclusive, the game will be available on Wii, DS and GBA. Expect it to hit the shelves in October. 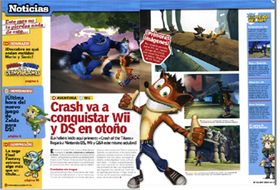 Crash of the Titans scan.

Note Crash's slightly different hairstyle. The times they were a changin'.

Crash has been going downhill ever since Naughty Dog left it.

Ahh yes, the days when Crash had to kiss Sony's ass. Crash now returns from the dead to find his place on the Wii, which is a good thing. It's funny how the once poster child of Sony must go to Nintendo in order to survive. Let's hope Ratchet and Clank make the move, which may be 10 years later.

Crash Bandicoot used to be good but lost momentum long ago.

Awww, I liked his old hair!

I never could like that guy. But now he's just not even worth my time.

AWESOME! Crash on the Wii will kick ass. I wonder if it's the same platforming game. The last Crash game on DS sucked.

I hope this game is cool, maybe like crash bash?

Amen Master Foot, I would love a Ratchet And Clank on Wii. Sadly, there is pretty much no chance of that ever happening considering it has been more or less one of Sony's Ace exclusive franchises. However, since this Crash and Spyro thing is happening, who knows.

This game might be ok if you can still spin and has all the old characters Crunch, coco, fake crash, tiny, dingo dile, engine, dr and Tropy.

Well of course Ratchet and Clank will not be on Wii. It is firmly in Sony's grasp.

Well, there's a possibility that Kingdom Hearts will be on Wii.

Well, I've played crash since I was little. I started playing in 1997, and have played ever since. Ever since naughty dog had left crash bandicoot, I think the way they created the games has gone downhill. The graphics and the look of crash and the enemies looked awful. Crash tag team racing is probably the worst available, they need to improve big time. After completing all crash bandicoots with all the gems and crystals etc, I think that the naughty dog game Crash bandicoot 3: Warped, released in 1998, was the best. I will still play the crash games as it is a tradition lol, however I really think they need to get much better. Shame naughty dog left really, they made the best games.

AlexKidd, he is cool. Mario stole his spin in Super Mario Galaxy. This one looks nice.

I can't wait for Crash on Wii. He was my favorite character of all times.

To all you haters, Crash Bandicoot is a classic. Hell, my dogs even enjoy watching me play this! I love Sonic & Mario always too.

Ahh, Crash, went downhill since Crash 3. Hope this one is actually good.

Oh my god crash bandicoot was my first game ever. Bring spyro to Wii as well.

Crash Bandicoot should keep going on creating new games! I was actually just on a site with a bunch of new ideas for Crash.