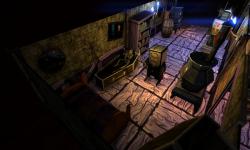 These days the Wii U is not getting a lot of support from the larger publishers i.e. Activision, EA, etc. Thankfully, indies developers seem determined to support our underdog system. Here are some of the notable titles to put on your radar.

First off, Popup Dungeon is currently in its last 42 hours. The game has been funded, but still requires a little more than 11,000 dollars if the developers wish to make a Wii U version of the title. Popup Dungeon will take cues from the popular roguelike genre, dungeon crawling fantasy and turn-based RPG strategy titles like Final Fantasy Tactics. Unlike most titles however, the game will be very customizable. The developers list being able to create characters, weapons and even abilities to the player's liking. A Dungeon Master mode is also said to be part of the game, as well as online multiplayer.

Next up is a very recently ended campaign for the title Heart Forth, Alicia. This title takes most inspiration from Super Metroid and Castlevania: Symphony of the Night as well as Xenogears for its story and epic scope. Described as an adventure in which a young wizard tries to stop a spirit from consuming her homeland, Heart Forth, Alicia has been developed on and off for seven years by one Alonso Martin from Mexico. In the Kickstarter campaign's final hours the funding for a Wii U version was reached, though not for the hoped for 3DS version. Still, the title looks extremely promising.

Finally, last but not least is Hover: Revolt of Gamers which comes from Midgar Studios in Nimes, France. The developer cites inspiration from both Mirror's Edge and the oh-so-awesome Jet Set Radio series with high speed parkour and a cel shaded look. The player defies a bullying authority which seeks to strip away our video games... no really! The team only sought a modest 38,000 dollars but have blown past it and at more than 100,000 can now develop a Wii U version which promises to take advantage of the platform's unique strengths. In addition, the team has secured the services of Hideki Naganuma as composer i.e. the composer of the epic Jet Set Radio soundtracks.

Both Popup Dungeon and Hover are still taking funding for stretch goals on Kickstarter. Those who wish to preorder Heart Forth, Alicia may do so at this link. Below are a few trailers for those who wish to see the titles in action.

Let's hope more projects are to follow so that our Wii U consoles do not simply gather dust while waiting for the next Mario or Zelda title. For Wii's World, this has been the Kickstarter update.