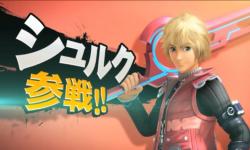 It seems that leak was real

During today's Japanese Nintendo Direct, Shulk of Xenoblade Chronicles was official confirmed as a playable fighter in the upcoming Super Smash Bros. for 3DS and Wii U.

The existence of the character was leaked last week in a set of videos, which were quickly pulled from the web. Nintendo has not commented on the authenticity of the videos. However, today's reveal suggests that the leaked footage was real.

"Looks like we don't have a choice!", I wonder if that's a slight nod to the leak.