Yoshi's back in Smash Bros Brawl

Yoshi's up-special-move is called the 'Egg Toss', which allows him to jump further. Don't you just wanna pick him up and give him a squeeze? 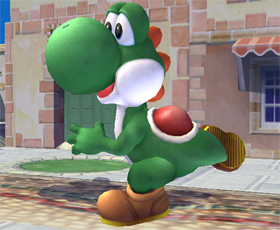 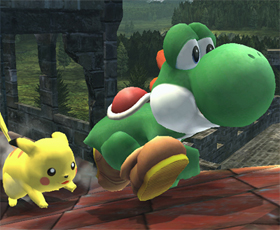 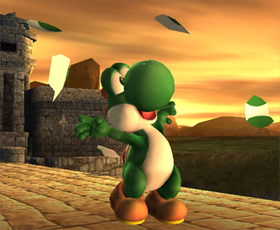 Birth of the antichrist. 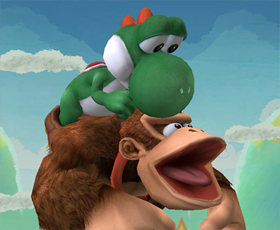 Yoshi looks even cuter than ever! And best of all, my post is first.

I've never liked Yoshi because of his disability of not being up to get an up+b move to elevate him. Hopefully with this it'll make me actually want to use him occasionally.

I don't particularly have any affection for Yoshi.

I'm amazed he wasn't shown earlier. I thought after they showed Yoshi's Island. It's nice to see his new move. I'd like to give him a try when Brawl comes.

Ok, now that Yoshi is in it, it is definite. I am getting this game.

That w3 guy stole my line. Anyhow, I liked using Yoshi, though I didn't use his special moves too often. I used his butt slam, but that was about it. Now that his Egg Toss is a recovery move, I might like him even more.

Yes the main characters from ssb are back.

Expected by everyone, however welcome. His egg toss being a recovery move might make him a more useful character. I can't wait to find out his final smash.

NO! They took away his egg throw move. That was the move that could be done to beat crazy hand and master hand.

Yes Yoshi is back and now he has a triple jump move.

Yoshi, you're too cool for Barney. Then again, Barney might make a really annoying support character.

Yoshi looks just like he does now. Awesome. I was hoping he would. Thank you again Nintendo.

Yoshi's awesome and now he looks like he does in Mario Party.

So let's talk about how I spent numerous nights online waiting for dojo to update at 3 am, losing sleep just to see if Yoshi is confirmed. The ONE NIGHT I sleep regularly he's updated. Anyway I'm excited and I hope his finally smash is really cool. Hoping for the newest update.

Barney can honestly kiss my left ass cheek, I hate him. I like how Yoshi's B up is going to help him actually ascend, but this means there's a possibility Sakurai is going to cripple the abilities of Yoshi's midair jump. I'll still love Yoshi either way though. He really is a great character.

God damn it I hate Yoshi.

And Yoshi hates you Keelan. Just shut up.

The should have Birdo as a character, so Yoshi won't be alone.

Me too Keelan. Me too.

Interesting. Then again, Yoshi was always going to be in. Now show me the blue dude with 'tude.

The bottom three captions were hilarious. Yoshi, cool. I still want Sonic to be in it though.

We know this won't happen, but what if Barney is an actual support character? I mean is he going to sing to death and make the other characters have hearing loss? Heh, I wouldn't be suprised if Godzilla was in this game. He'd squish Barney with his foot or bite him in half with his teeth. I love Nintendo.

Keelan, you n00b. Yoshi owns you, and after Brawl comes out, I'll gladly own you with him against any other character you choose. Besides, he's been a veteran since the beginning. Show some respect.

Most likely the eggtoss will be like ness where you have to hit yourself to go up.

Yoshi is awesome, he is my favorite Mario character.

Why Keelen, is it because every time he faces you he KICKS YOUR ASS.

If Barney were in brawl I'd decapitate him with Link.

Screw you Keelan. Yoshi is one of the greatest Mario characters, let alone Nintendo creations to have ever been created. If you have nothing nice to say about Yoshi, go somewhere else.

Lol on that last caption. Dream match: Yoshi vs Bowser vs King K Rool vs Ridley. Assuming that they put them all in.

Well, was waiting for him this week.

I agree with my pal CJ! Ya'know Keelan. I can imagine Yoshi eating you, turning you into a egg, and then he'll eat you sunny-side-up.

Come on Barney can't be that bad. If he sings everybody would shoot themselves in the head and you would probably automatically win.

Woot. Yoshi Is my favorite Nintendo character. Nintendo scared me for a second there. I thought he's wasn't in this. I'm so relieved. And Keelen, I promise I will find you.

FINALLY! I expected him to come weeks ago! Well anyways, I'm glad he's back. Oh, and Barney could be an unlockable singing Sandbag.

I see what you mean CH. He'd keep on eating him for life, since anything he eats turns into an egg. He won't have to starve very often.

Yes I've waited forever to see if yosh would be in the brawl, he's my all time favorite.

Barney in brawl? I think he'd be more useless than jigglypuff, he could have a singing attack as well.

That's just there for show man with cap. He's not literally going to be in brawl. And by the way, the game is finally pre-orderable anywhere now. If you haven't yet, do so now.

Excuse me, I'm the bomb with jigglypuff, her and yoshi I think are the most underrated characters. And leave keelan alone, he's just trying to get a rouse out of all of you.

To be honest, Yoshi is the most annoying character in the game. I don't hate him, but he's just annoying. And CJ, we were only having fun about Barney being in Brawl.

Yoshi got brown shoes instead of red.

Yoshi is going to be really awesome.

Yoshi RULEZ. He was (and still is) my best character in Super Smash Bros. (If you hate Yoshi, well... I can't come up with anything threatening enough). So far the 3 characters I will use most in Brawl will probably be. 1) YOSHI, DUHHHH. 2) Meta Knight - What can I say, he seems to have great moves. 3) Until somebody better shows up, Pokemon Trainer. I can not wait for their final smash attacks.

I should preorder this game because I'm guessing it will be sold out on the first day it hits the store (I changed my name from yosht121 to YoshLee).

Sweet! Yoshi can do noogies?

Yoshi was my first character ever when I got ssbm and my first unlocked character was marth.

4th picture looks really good, like if he was really getting lice out of DK's fur.

Yes yoshi will probably have alternate colors but my favorite color of his is green.

If barney was in the brawl, he would probably sing and bore everyone to sleep. Then he calls his crap children to trample us all, but we'd all beat him up anyway.

I was so happy to see Yoshi in the game, he rules.

Yoshi's my most favorite character in the game. It would be a nightmare if the teletubies were in brawl, all 4 would follow each other like the ice climbers. Their final smash would be to yell, big hug.

Keelan, In a couple of years, you will find yourslf in court with me. Yoshi is even my favorite charecter. Yoshi is awesome, and whoever says that yoshi reeks, I will find them in court.

I have brawl right now and yoshi kicks ass. And for you keelan, I'd agree with scooby jew. I could probably own you with any character you choose. And that goes to anyone who thinks Yoshi sucks. I am his best friend.

I think Yoshi is so cute. Birdo is cute too. I think there has to be more Yoshi shirts and Yoshi pants.