Zelda shows off her moves

Standard special move: Nayru's Love
Nayru's love is the tough kind of love. Crytals appear at Zelda's sides and start revolving around her, acting as a shield against projectile attacks. 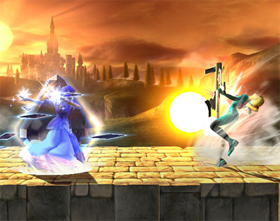 Look what I just dug up..

Side special move: Din's Fire
This one only works well if you charge it up using the special move button. Tilting up and down allows you to aim the flame, then bam. 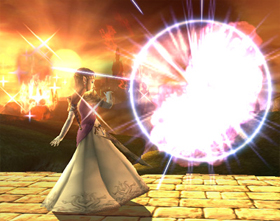 I fired a dud. 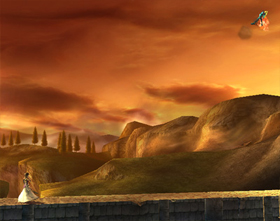 Up special move: Farore's Wind
If you find yourself at peril in the air, this move can help you get back to safe ground. After a short whoosh Zelda will disappear and fly in the direction you're holding the control stick. 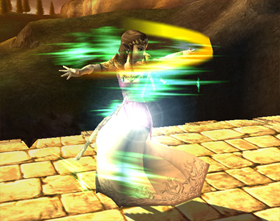 Watch me! Are you watching? 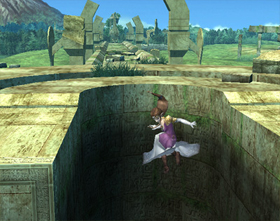 Not to complain, but they also told us about the Ice Climbers Special Moves today, it's under Zelda's. Anyway, about time they told us about her special moves. Personally I think they should have mentioned that it was Farore's Wind was the move she used when she teleported onto the stage in the Subspace Emissary, but it's not really a big deal.

The captions are funny like usual! Keep up the good work.

After eight months they finally post Zelda's moves. I wonder when they are posting the other characters.

OK, whoever thought up these captions deserves an award for making me laugh so hard. I can't wait to be Zelda.

Same as last game but kewler. It's getting closer to the release date.

Hey what stage is that in the last pic?

Zelda's moves are basically the same as they were in SSBM. Ditto for the Ice Climbers.

HEY NINTENDOOF, Zelda is not dull! She is powerful (light I'll admit), but her moves are strong. How dare you talk smack about my favorite fighter.

Okay sorry. I don't want to end up like NoNB.

I agree with davyt, Zelda looks awesome in this game. Her moves are sweet. She was one of my top picks for Melee, I use her a lot. I still play Melee.

Can't wait for it to come out.

WIIPING FOR Wii, I'm not sure, but I think it is from the Adventure Mode, I don't recognize it as a stage.