The first is a stun-gun known as the Paralyzer. You can charge it up a little, if you get someone with it you'll be able to add extra attacks while they're stunned. 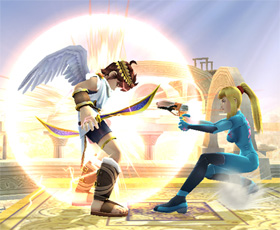 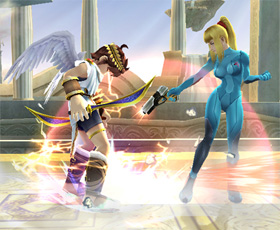 Then there's the Plasma Whip, a stronger attack where Samus' gun turns into a lash of plasma. 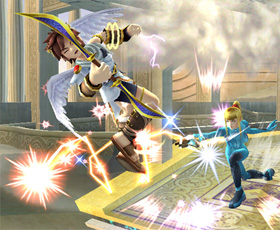 Her third special move is called the Plasma Wire, it can be used as a recovery method to latch onto ledges, or to draw enemies closer to you. 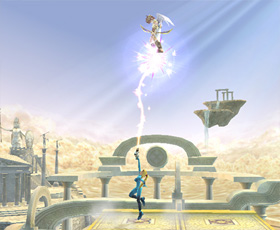 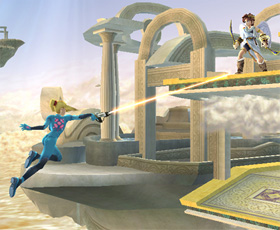 Me Jane, you Tarzan.

First character I'm going to play in Brawl is Samus, mostly because I loved the Metroid Prime games so much. Hopefully I'll get to be Zero Suit Samus in my first game! I hope you can somehow unlock Zero Suit Samus as a standalone character, because what if you have items off but want to play as her?

It looks like Zero Suit Samus may be taking Shiek's place. The move sets are pretty similar.

I wanted one of zero suit samus' moves to be ice beam, that would be so cool. Well there's ice climbers and freize.

I can't figure out if Zero Suit Samus is also a stand alone character, or if she is only gotten by the final smash ball. If all else fails, I guess I'll find out December 3.

I don't think she'll be a stand alone character, because she doesn't have a final smash. Only samus does and she's part of samus, so you'll have to use her final smash to use zero suit samus. I think that's how it goes.

These moves are kind of interesting. I like the second one, where she hits him in the balls.

That's true, super king. Maybe there'll be a way to become Zero Suit when you choose normal Samus on the character roster, much like Zelda and Sheik in Melee. We'll see, though.

Actually her Down B move is when she points the gun down. It says in the update if you "smash" down. Thus it's the down b move.

I'm pretty sure they said they will have no more transformations, just standalone variations.

She can stun me anytime.

That's some range the whip has. And I agree with Super King; Zero Suit Samus needs to be separate from her clothed counterpart.

To SuperKing: maybe ZSS will be like Zelda. Before you start the battle just hold the 'B' button and you'll automatically start as ZSS/Sheik. Samus is becoming a one-of-a-kind character with no par. Maybe Ridley will set her straight.

One thing to note is that on the SSBB website doesn't have the Final Smash "item" in the items section. It instead has it in the how to play section. I wonder why? Either it's just a mistake by the website or maybe you obtain the final smash "item" after doing something. I dunno, anybody else's thoughts?

Super King: They'll probably let you hold down A before the match to start out as Zero Suit Samus, just as you could with Sheik in Smash Bros Melee.

That's a good point Super King. This update was late on the SSBB website and I don't think it was really worth the wait.

Zero Suit Samus is actually part of Samus. After Samus gets the smash ball (an item that lets you unleash your super smash) Samus shoots a super beam, then her armor falls off.

Correct A dude, you get ZSS only after performing a final smash (Zero Laser). Sheik is in Brawl, by the way.

If you want to play as ZSS from the start, all you have to do is hold the shield button when selecting Samus. Her armor falls off when the match starts.