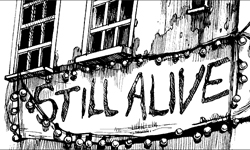 If we do not seek to prevent apocalypse

For the past few weeks Ubisoft has been running a comic called "Z-14", releasing episodes on a daily basis to drum up interest in ZombiU on Wii U.

If you haven't been reading, now is as good a time as any, because the comic is complete. Head over to the Z-14 site for an interesting read. It's not interactive, but the way the panels fade in as you scroll down makes for some simple but effective animation effects.

I'm not really a comics guy but that was pretty cool.