Grab your pick-axe and dig into the sequel to the award-winning SteamWorld Dig! A platform mining adventure forged in Metroidvania flames.

In search of her lost friend, a lone steambot and her unlikely companion must dig deep, gain riches and explore an underworld riddled with danger. But time is running short...

SteamWorld Dig 2 has no review on Wii's World. Write a review 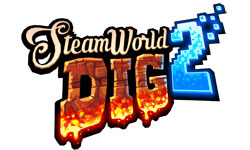 SteamWorld 2 gets physical retail release
Image & Form's action/adventure/platformer SteamWorld Dig 2 is now available to buy on physical shelves in an actual shop on a real...