Enter at your own risk! If you think it's scary on the outside, wait till you see the basement.

You're in for the longest night of your life. Ghosts, goblins, demons, wolves, bats ? creatures lurking around every corner. The further you delve into the castle, the worse they get... Better explore every nook and cranny - it's your only chance of finding a weapon or two. You're gonna need ?em. Because when you finally meet the Count, you know he'll be going for the jugular. So keep your courage up and your stake sharp...and say your prayers.

A quick trip down memory lane can produce some surprising results. The Nintendo Entertainment System was obviously the clear winner of its generation but among the line-up for the system was a surprising amount of great trilogies. Teenage Mutant Ninja Turtles, Dragon Warrior,...read full review 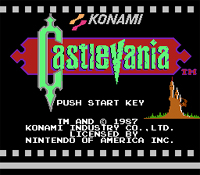 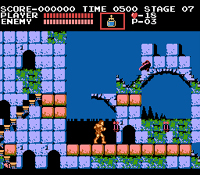 Glad to see this game will be making a reappearance in the market. Of all the Castlevania games, this one is my favorite by far. It has the best soundtrack of any NES game (in my opinion), and efforts are well rewarded in this challenging game. Hope to play it again soon.

This game is convincing. They should probably remake this. But they're remaking a different Castlevania game, so I won't judge.

Part of the box art gives me the creeps. Was that even necessary? Think of the children!

Awesome Castlevania, I had Caastlevania 64.

One of the earliest and still the first great platformer of its time. Only rivaled on NES by SMB 3.

I hope that Dracula's Curse gets released on Virtual Console one day.