Published by Jaleco, Developed by Hect

Released in 1985 for the NES, City Connection is a highway action game which sees you race to drive all the highways of the world! As a young Californian driving a customized automobile, you must avoid pesky cats and the ever-present police who will stop at nothing to bring your journey to a screeching halt.

Utilizing oil cans and death-defying jumps, throw your assailants off your trail and travel the world from New York to Egypt in this exciting arcade game!

City Connection has no review on Wii's World. Write a review 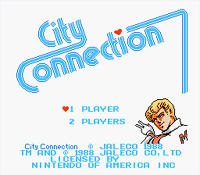 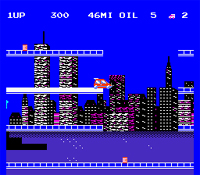 A platfomer. With cars? I got to lay off Warioware.

Awesome game from back in the day.