The classic that launched the careers of Donkey Kong and Mario. Climb all the way to the top and save the beautiful Pauline from the paws of the giant ape in this colorful platform game.

Released in arcades in 1981, Donkey Kong became a cultural phenomenon everywhere and put Nintendo on the map among video game enthusiasts. It introduced a little hero called Jumpman which would later be better known as Mario. The Game & Watch version introduced the +Control Pad which became a standard in the industry. The NES version, which you can play here, was a launch title for the console as well as one of the most faithful adaptations of the original arcade game.

Donkey Kong has no review on Wii's World. Write a review 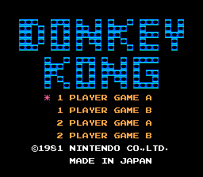 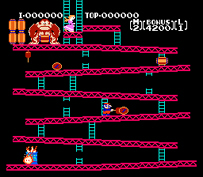 Whoa! I love this game at the arcade area at gameworks.

I played it on donkey kong 64! I always lose.

This game is so fun. Who doesn't like it. Go dk.

I love to play this in little arcade places.

When I first played this game, it was on Donkey Kong 64. I sucked at it until I got better. Lucky me huh?

This game used to be at an arcade by me and I played it all the time. Almost forgot about it until I encountered it on DK64 and again when I got the Ecard for it.

This game is pretty pointless. Once you have beat all 3 levels there is no point of playing it any more. It's fun if you haven't beat it before but once you have it's really boring. They should add more levels for the VC.

The first time I played this it was on DK64. I finished it like a thousand times and had endless fun.

They need to make donkeykong 64 for the Wii.

Wiiman is right. I used to play it on n64 but I got mad and punched the couch too much so I quit!

Hey toad I played it on dk64 too. It only needs practice, I practiced and got to the end. Keep trying :)

You're right wiiboy I passed it a zillion times.

Thanks Ian C. It doesn't even have anything to do with donkeys at all. The title is so misleading.

The original one from 83'. Look over the years, about how much gaming has changed. Amazing.

I think they were originally going to name him Monkey Kong.

They were. But "Donkey Kong" means "Stupid Monkey" in Japanese. Seeing how a donkey is a jackass.

Also, I was going to download this game as soon as I got my points. But then I realized, there was only 3 levels. And I could never get past the 2nd.

I'm offended to hear that part. Sometimes, Japanese people shouldn't name him something stupid. I have nothing against the name, Donkey Kong, but maybe Japanese people are bad at meanings.

Yeah, I guess you're right. But "Kong" just simply comes from "King Kong". Seeing how he was a gorilla too.

I have it on the original Gameboy.

Was this like the first arcade game ever? Or was Pacman?

There were many games for arcades before DK & Mario's time. And yes, it came out after Pac-Man. I'd say now Mario is the same age as Ms Pac-Man!

"Jumpman Kart", "Jumpman Party", "Super Jumpman Bros", "Jumpman vs Donkey Kong". The only good title out of all of them is "Jumpman Hoops 3-on-3".

It turns out that this donkey kong was actually cranky kong.

That is DK, I looked it up. It's not Cranky.

Let me guess: Donkey Kong put a plate of lasagna in front of Mario and took Paulina and climbed 5 sets of ladders and Mario has to save Paulina from the tyranny of DONKEY KONG! Am I right?

Nintendo Classic, get it people.

you know who said:

If you didn't beat it at DK64 you couldn't continue in the last level because you needed 2 coins (one from that game and the second from a game in Cranky's house).

I bet steve wiebe has this.

This game was the arcade title to replace the action shooter game RadarScope. I'm glad Nintendo did a good job of it; though I'm surprised one level from the arcade is still missing. How hard is it for Nintendo to put the pie factory level in the game anyways. Heck, even in the classic NES Series as well just when the GBA could handle such great games like Golden Sun. Also I remember the movie studio Universal once sued Nintendo against this game been similar to King Kong. Evidently, Nintendo won that case and Donkey Kong as we knew it is history. This was before the greats that were the Donkey Kong Country trilogy.

Cranky was the original Donkey Kong.

Does anybody know how many people bought the first game with Mario (Jumpman) in it?