Double Dragon is one of the most popular arcade-style action fighting games ever, and has been used as a classic model for subsequent beat'em-up games.

Published initially as an arcade title only, it's huge success has allowed the game to be converted across multiple platforms.

Double Dragon tells the story of two brothers, Billy and Jimmy Lee, who start a journey in order to save Billy's girlfriend Marian. The girl has been kidnapped by the Black Warriors, a gang of martial artists that are trying to learn the secrets of the technique SouSetsuKen, mastered by the two brothers.

Double Dragon features offers a deep combat system based on punches, kicks and many weapons and interactive items. Moreover, the story will take the player to visit and explore many different locations, from the city suburbs to the mountains.

Double Dragon has no review on Wii's World. Write a review 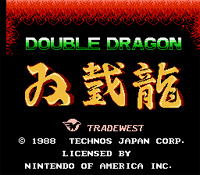 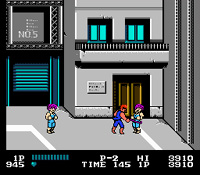 This game is still fun but it's one of the hardest. I need to get ripped like Abobo.

I hope that comes out and with Battle Toads.