The Mad Gear Gang has emerged once again, and this time they want revenge! They'll stop at nothing to bring Haggar and the entire world crumbling down. To prove they're serious, they've kidnapped Guy's Master, Genryusai, along with his daughter, Rena, who is also Guy's fiancee.

Now Haggar must travel far and wide to search for Genryusai and Rena. But he's not alone - helping him are Rena's sister, Maki, and Haggar's apprentice, Carlos. Together, the three set out to take down the Mad Gear Gang once and for all!

Take control of any of the three heroes and make use of their unique abilities in a fast paced adventure which will take you to all locations of the globe. And you're not alone, either - you can also have a friend join the heroic fight to bring an end to the Mad Gear Gang!

Final Fight 2 has no review on Wii's World. Write a review 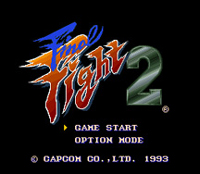 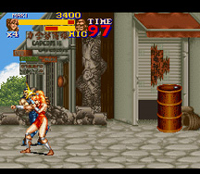