Following the defeat and subsequent disappearance of the Mad Gear Gang, a small group known only as Skull Cross is responsible for a new uprising of vandalism, terrorism and death. The government of Metro City is at a complete loss.

Metro City's mayor, Mike Haggar, and Guy prepare to take on the new gang with Cody's old friend, Lucia, when suddenly a mystery man named Dean with a special grudge against Skull Cross shows up to join the action.

The streets are dangerous! Take on any member of Skull Cross that stands between you and your goal. Remember to grab some food to revitalize your strength, or you may find yourself face down in those dangerous streets!

Final Fight 3 has no review on Wii's World. Write a review 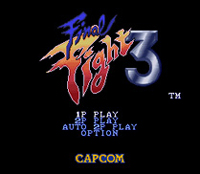 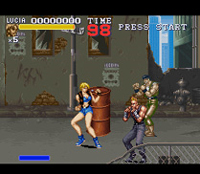