Prepare to face-off for one of the most faithful sports simulations on the NES.

Ice Hockey offers straightforward fun to just jump in and play, either solo or against a friend, yet also requires tactical skills for players who want to fine-tune their team. You can customize each squad member, selecting from three different body types, affecting their offense and defense. Leaner players are faster and better in a face-off, while heavier players have stronger body checks and shooting skills.

Ice Hockey has no review on Wii's World. Write a review 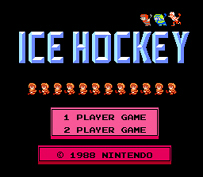 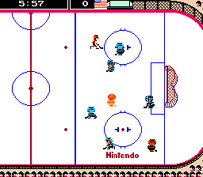 Best nes game EVER! In fact best hockey game ever. Fast, fun and easy to learn. I'm definitely getting this.

This game is amazing! No doubt about it, the best download I made, and it was the cheapest! I've played this with everyone and they all get hooked on the simple and addictive gameplay. Best speed to play on is 4; fights happen all the time!

This was a microgame in warioware:Twisted!

DOWN WITH HOCKEY! I say that because I suck at ice skating. My first experience, I rushed into the ice rink thinking it'd be no prob, then I fell. I hate ice skating. I could barely make out of it myself!

Ahh don't worry you'll get it CJ. I fell on my butt my first time^^.

Wow. Looks like pong with a bunch of guys playing at once.

Thanks for the support Ian C! I'll try again next time.

It looks like pong? Are you stupid? What it looks like is a great game with nice graphics. I would have to agree with wiiboy this is the best nes game but maybe not the best hockey game ever. If only they made more games like this, i.e: it takes a minute to learn and a lifetime to master.