Plumbers Mario and Luigi must dispose of all the critters coming out of pipes in the action-packed arcade game that initiated the most popular video game franchise of all time. Two players can cooperate and compete in one of the first multiplayer hits of [P]Nintendo[/P].

As its title suggests, Mario Bros. marks the first appearance of Mario's brother Luigi when two players compete together. The game also introduces several staples of the franchise. Mario is now a plumber (instead of a carpenter in Donkey Kong), faces turtle-like enemies and can collect coins in bonus stages. However be careful, it is not yet possible to directly jump on enemies like in further episodes. Find a way to make them inoffensive beforehand.

Mario Bros has no review on Wii's World. Write a review 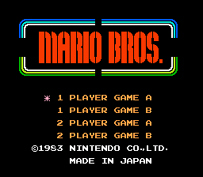 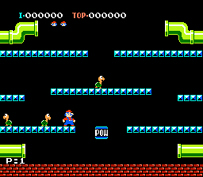 Yea! I can remember my dad getting out his old games and I played this for hours. I was only like 4 and I was born in 1993.

The new super mario bros was cool but not as good as the original.

Cool but I hope they don't forget about super mario bros.

The graphics are crap but the games are good.

Hello! This game is from 1983! Don't expect wonderful graphics.

Of COURSE the graphics are crap, Jake. It was 1993 for gods sake. It takes time and brilliance to come up with the computers and hardware to get video games where they are today! Besides, the classics are the best video games on this planet.

Everybody has their opinion but I think it's hot. Still they should have improved the graphics at least a little bit so it would look more modern.

No they should not, because then it's not a classic game any more. Me loves retro.

The graphics back then were simple and understandable.

I think it's a great idea for the Wii. They can not change the graphics on this game, then it would be not classic like how menno said and it's not as fun and it brings out the good times.

That was a fun game.

This was the game that changed mario forever, I think.

Mario changes in every game. Some games he doesn't say anything (paper mario) and some games he can't shut up!

I LOVE THIS GAME! Even though I get real mad at it.

Yeah sometimes I think I'm going to win but then a koopa comes and falls on you, or comes up from behind.

They oughta make a remake of this game on DS like they did with Super Mario Bros.

This is why I want Wii points .

My dad and I play this all day long, but I'm Mario.

Man, the original version from 83'. This is a must have for a VC game.

What's the difference between playing as Mario & Luigi? ABSOLUTELY NOTHING!

I like Luigi too, but I don't really play as him that much because of his brother. I really liked the Luigi's Mansion game back when Gamecube became a huge hit.

I just got this.

How come Mario is blue in the top pic?

They sometimes make the sprite's color on the box art wrong. One example is Donkey Kong.

Wario isn't even in this game.

OH YEA, I remember playing this game all the time when I was little. I like Luigi more than Mario, but my all time favorite Mario charachter is Yoshi, YOSHI ALL THE WAY!

Speaking of Wario, has anyone here ever played a virtual boy? Yours truly has.

I heard of VB Wario Land, never played it though.

Those are not Koopas in the picture.

What? Look at mario on the cover.

I hate the jumping in this game.

I remember this! Me and my uncle played this all the time when I was little. I was always Luigi, though.

This game was okay at the time but I like the one included in Super Mario Bros. 3 in the All-Stars edition way better than this. Heck, it was even better than the one included in the many Super Mario Advance ports for the GBA. Koopas (evolution of the shellcreepers), spinys, buzzers, spinning destructo disc, and the mad boo diddly all add up to one great Mario Bros. Competition package, you also got eight different levels of competiton before the game determines the winner. Of course without this game, the one in Super Mario Bros. 3 won't exist today.

I prefer this game on Super Mario Bros 3 for GBA as an alternative. Graphics are improved, and the jumping is better.

Mario would still be a carpenter if this game didn't exist.

Sure the graphics suck but classic games can be more entertaining than many games are today.

I prefer this in Super Mario Advance for GBA it's easier to control and fewer quarters spent.

This game was awesome!