Choose from four different mercenaries and battle against the terrorist group "Amadeus". Skillfully jump and shoot your way through enemies while picking up items to replenish your weapons. Like in the previous games, you can ride vehicles and fight rigorously against enemies. Furthermore, Metal Slug 4 introduces the all-new Metallish System, an interesting bonus scoring system that puts a new spin on things. Additionally, there are new items and characters, creating a fresh new take on the Metal Slug universe.

Metal Slug 4 has no review on Wii's World. Write a review 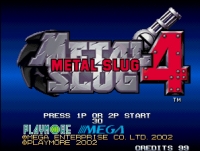