Metroids ? the most dangerous creatures in the galaxy ? have fallen into the hands of Space Pirates! As bounty hunter Samus Aran, battle through the depths of planet Zebes to take out the pirates? leader Mother Brain and restore peace to the galaxy.

The original NES classic Metroid introduced gamers to a unique mix of action and exploration that has become the series' trademark. Use Samus' Morph Ball ability to search every nook and cranny, and uncover power-ups like the Ice Beam, Varia Suit and Screw Attack.

Metroid has no review on Wii's World. Write a review 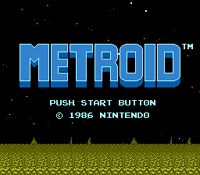 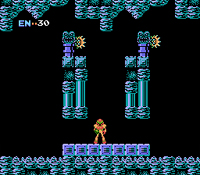 I already have this on my gameboy. I guess the only appeal to this is that it has the original date and no -2004 alongside the title screen.

What about price? I got it on Metroid Prime for free. And on ZM. And on GBA. And on original Cartridge. Why buy it for $5? I'll tell you why. So we can always have a copy somewhere.

I checked Wii Shop Channel for this and I couldn't find it. Can someone explain this?

It comes out today, August 13th.

This game crashes a lot! At least I completed it with the fastest ending which is Samus in a bikini.

Let me add something. It also has the fully functioning "Tails" code.

For anyone who's interested, here are the two famous passwords in the game: NARPAS SWORD0 or JUSTIN BAILEY 000000 000000------------ The Nar Password code allowed you to start with a full power ice beam, full power-suit, and every equipment included as well as invincibility. The Justin Bailey password allowed to you play Samus in her bikini along with the cool ice beam.

Figures this came out on my birthday.