This cute pinball simulator was one of the first video games of the genre and still holds dear to many NES owners. Just as on a real pinball table, your goal is to flip the ball up and never let it fall off the bottom. How many points can you get?

Thanks to a clever design and a good simulation of real pinball physics, Pinball remains an enjoyable challenge even today. You might find numerous surprising ways to improve your score. Pinball also features a hidden bonus game in which Mario must save Pauline, just as he did in Donkey Kong. Younger players should not mistake Pauline for Princess Peach, or she will get quite angry!

Pinball has no review on Wii's World. Write a review 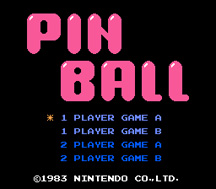 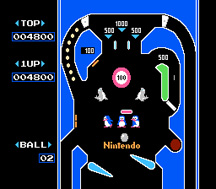 I don't, and I especially don't love pinball enough to pay $5.

I wonder what this is about? Is it a card game!

I have it for e-reader, so I not buying the same game again.

Is that it? Pinball, that's a boring name for a video game. What about super pinball, extreme pinball. Not just Pinball.

Wii Freak, this game was made in 1984, or 83, so the title has to be boring. Remember the game, Zombies ate my Neighbors? I never played it but the screenshots look sucky. I heard Mario was in this game, but you only play him on the bonus round.

ZOMBIE ATE MY NEIGHBORS OWNED! As for Pinball. I'd have to agree. Not so great.

Maybe that's why your name is Vgcrazy!

Oh my gosh, compare this to the pinball these days.

Can you believe that this is a Mario game?!

It's not really a Mario game, he only made a cameo.

What does cameo even mean?

You remember how Mario appeared in Sim City. Or how Samus & Link appeared in "Super Mario RPG", that's a cameo.

It's really strange that Mario was in this before he went to Super Mario Bros.

"he's a pinball wizard, there must be a twist. The pinball wizard has such a suple wrist! How do you think he does it? I don't Know!" -The Who.

To be more specific, a cameo is a usually brief, tiny appearance from a character or person from another game series or tv series. They don't necessarily have to be from the same companies/producers. Example: in super mario Rpg, the cloud guy (I have never played the game) said this "Why are you being heroic? Your not Bruce Lee, you know". Where was the cameo? That's right, bruce lee.