Soccer offers a choice between seven national teams (Brazil, Germany, Spain, France, England, Japan and the USA) and five different difficulty levels. Play solo against the computer or compete against a friend in the two-player mode. Soccer was also one of the first football games to include penalty shootouts at the end of regulation time, and also features an entertaining half-time show!

Soccer has no review on Wii's World. Write a review 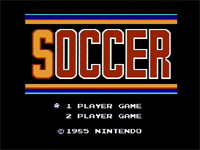 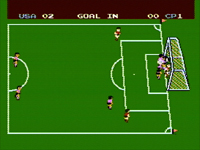 Kind of looks like a mini game on wario ware.

Haha that looks really lame. Is it?

This was one of my favorite NES games.

Super Soccer was better for SNES, maybe it was the sequel to it. If this is a sequel I'd get it.

It's a pretty good soccer game, but very slow.

They should have this game on the next "Wii Sports"!

This game has slightly better graphics than Baseball. Baseball was horrible.

This game is so old school!