Tecmo Bowl pits the player versus the computer in 11-game, single-elimination playoff action. Players also can go head-to-head with a human opponent in action or coach mode. The player can select from 12 teams. On offense there are usually two run and two pass plays to choose from.

The player takes control of the quarterback before the snap and then either hands off to the running back or works through his receiver progression from the top to the bottom of the screen.

Defense consists of trying to guess which offensive play the opponent will select and then taking control of one of the defensive players before the snap. A very simple power-meter system is used for kicking field goals, extra points and punts.

Tecmo Bowl has no review on Wii's World. Write a review 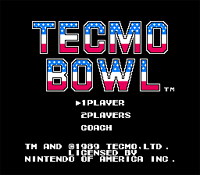 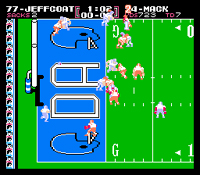 Isn't Tecmo soppose to be a Japanesee company? Because they made games like DOA, and Super Swing Golf. I mean I understand that, but did they really make an american football game?

If you didn't see the images, you'd think this game was a bowling game.

You REALLY don't need this game. Just get "Madden 07" for the Wii!

I can't believe they erased all the names off the jersey, since EA owns all NFL rights now. It's not worth getting anymore. I'll just find it used.

I'm not a sport's fan at all. Well there is World Wrestling Entertainment, the only sport good enough for me. So there's no way I'm getting this.

Wrestling. The only "sport" for you haha. It's not a sport, it's a soap opera.

Stay out of this bob-o. Wrestling is not a soap opera. Learn your shows before you state an offensive comment.

Tecmo Bowl started it all. Tecmo Super Bowl changed everything. These games are classics. Any boy who was into sports and had a Nintendo back then knows this. Get the Giants and no one will ever make a field goal or extra point on you again.