Zelda 2: The Adventure of Link | NES

Zelda 2: The Adventure of Link

In Zelda II: The Adventure of Link, Link is on a quest to seek the Triforce of Courage and awaken Princess Zelda from a sleeping spell placed upon her by an evil wizard. Meanwhile, Ganon's minions are attempting to resurrect their master.

Instead of the regular top-down viewpoint, Zelda II uses a side-scrolling perspective and overworld map, and features role-playing aspects that are unique to the series. Zelda II also features many character and place names that fans of the series are sure to find familiar.

Zelda 2: The Adventure of Link has no review on Wii's World. Write a review 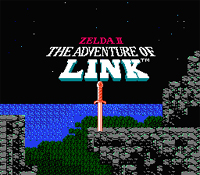 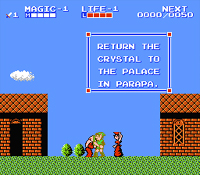 I don't even remember this one man.

This was the sequel to the original Legend of Zelda. I didn't enjoy this one as much as the original, but still it was a pretty good game.

This looks a lot different to the original.

This one kicks ass I thought.

This was my favorite back in the day.

They tried a different format for this Zelda, with magic bars and life bars besides a different view (Kind of like Super Mario Bros 2). They obviously went back to the original style, but this is a great game anyway, if a bit harder to get into.

I love the song in this game.

Oh god this game was horrible. I thought it almost ruined the series.

The castle theme in this game is the music for Hyrule Temple in Super Smash Bros Melee. LOVE it.

Three Zelda games already came out on the VC. And I'm pretty sure that most of you have "Twilight Princess". Do we really need this one?!

Hmm. I checked my virtual console, and it doesn't show Zelda 2 on mine. Or excitebike, I guess it hasn't come out here.

Why not have this one out for VC, you can already get ocarina of time, and A Link to the Past, everywhere. This and the original are the only ones worth getting if you don't already have the collectors edition. Plus there's a Wii version of Ocarina coming out where you can use the controller I've heard.

I have this on my nes, it still works after countless years. I don't like the side scrolling thing but it was fun.

I'll get 2000 Wii points and download This one, Zelda 1, Punch out and Metroid when it comes out on vc.

I'm at the last level!

This is by far the best Zelda game ever made and I don't mean that as disrespect to others in the series.

This has the konami code on it and why is it a screen scroller.

You kids just don't like it because you weren't born when this came out. It was as exciting to get this game as it was for you children to get Brawl last week.

Man, the ending with link and zelda really blew my socks off.

This game is one tough Zelda title, like the Four Swords games this one doesn't had any rupees to collect but it was the first game to show a different perspective to Link and Hyrule. I'm glad Link's Sword Implant move which first debut in this game, was included in Soul Calibur II. This game is also the first Zelda title to use magic and also allowed Link to jump without the use of a feather.