Releasing near the end of the Super Nintendo's life, EarthBound could be seen as a right game being released at the wrong time... at least in the western market. Not only was the game released three years before Final Fantasy 7 would make the genre 'cool' for console gamers, but it was also one of the first games to be released in an expensive collector's edition. Coupled with somewhat poor marketing and the game was met with underwhelming sales. In the nearly two decades since its release however, EarthBound went on to gain one of the most dedicated groups of fans, in gaming or otherwise, and their passion for EarthBound is well founded.

EarthBound is in fact the sequel to a game that was nearly released in America for the NES, but was pulled at the very last minute over concerns that it would be overshadowed by the new Super NES. In Japan, it was known as Mother, and told the story of a group of young children rising up to fight an alien menace known as Giygas. 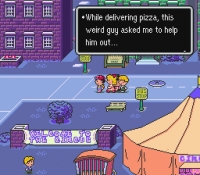 Earthbound a.k.a. Mother 2: Giygas strikes back! naturally involves Giygas coming back in order to finish what he started years ago. Thankfully, players don't need to know any of what happened in the previous game to enjoy the story, setting and characters of EarthBound as the connections are loose at best. A new group of heroic children led by Ness rises up in 1990s America to take the fight to Giygas, hopefully eliminating his threat for good. To Smash Bros. players, yes, this is the same Ness you've been fighting and using for years.

At its core, EarthBound is not that different from the multitude of Dragon Quest based games coming out of Japan during this time. Players took control of up to a four character party, went around to different towns, fought a lot of monsters (though without random battles) and occasionally solved a minor crisis while trying to save the world. EarthBound's developers though, knew that they needed to stand out in the crowded Japanese RPG marketplace. So while EarthBound's core mechanics might seem dated, everything else that makes up the game is much more unique.

First off, the biggest difference between EarthBound and most JRPGs is that it takes place in a version of contemporary America. Players equip weapons like baseball bats, frying pans and bottle rockets instead of swords and shields. Enemies might consist of hippies, UFOs, conservative politicians (YES!), or giant Ants. Characters use psychic powers, not magic. Fighting enemies earns you money deposited into your ATM account, and calling up Ness' dad saves your game. Though these might seem like minor differences at best, they help make up the game's unique world and are a breath of fresh air compared to the mundane goblins, churches, gold, etc. of a typical fantasy title. 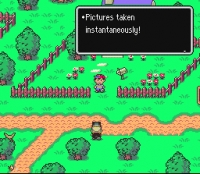 While EarthBound truthfully doesn't have a great overall narrative (again echoing Dragon Quest), it is incredibly funny. Nearly all of the characters have something funny to say, and even without them the characters end up in some bizarre yet hilarious situations. One scenario involves trapping a group of ravenous zombies with flypaper, while another has a cult obsessed with the color blue. However, there are also some surprisingly dark moments involving child abuse, neglect and disillusionment. There really isn't one 'tone' to the game and it works surprisingly well that way.

In terms of graphics, many will likely deride EarthBound as it isn't graphically impressive even for a game made in '94. This is likely due to the stylistic choice brought over from Mother 1, which looks surprisingly similar to Charles Shultz's Peanuts comic strips. That being said, the game is very colorful and each area has its own unique identity, which helps make EarthBound stand out from the countless RPG clone games on the SNES. In addition, the first person battle screens (again brought over from Dragon Quest) show psychedelic colors and waving patterns instead of merely a few trees or static scenery. Even some games today could take a lesson from EarthBound's desire to be unique.

The game's sound effects are equally bizarre, but in a good way. The soundtrack however, might be EarthBound's crowning achievement. Nearly every one of EarthBound's musical tracks is memorable and fun, and what makes them even more special is that they almost always fit the emotional tone of a scene. Particularly special are the tracks that seem to take cues from famous bands like The Who, The Rolling Stones and even The Beatles. Even if players don't want to purchase EarthBound, they owe it to themselves to look up the soundtrack, even if just on YouTube. 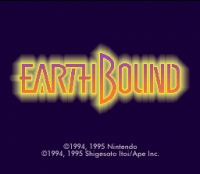 No game is perfect however, and though it is amazing, EarthBound isn't perfect. First off, the game is almost brutally hard in the beginning, as you won't have your full party of adventurers until more than half way through the game (again, taken from Dragon Quest). Players will also need to do a lot of grinding to finish the game, even though it does tend to go faster than most JRPGs. Finally, there is a relative lack of direction in terms of where to go next, though some might be happy with this nonlinear approach. Because Nintendo has graciously added a digital version of the original EarthBound strategy guide, this isn't as much of a problem now, but it's still worth noting.

EarthBound will likely last most players about 30-40 hours depending on how much time is taken to explore. It is however, a game that will likely be played more than once. If players are looking for the other games in the series... well, the only real way to get both games (Mother 1 and 3) would be to either import the GBA versions or find them online. Mother 3 is a game that deserves attention, but use your discretion when choosing.

EarthBound is definitely an RPG with style as opposed to just another generic fantasy title. Even the final boss is based on a childhood trauma of the creator! If you're an RPG fan willing to do some grinding and are looking for an alternative to the increasingly disappointing Squaresoft, EarthBound is a game well worth your time and money. Spend a little time with Ness and co. and you won't be disappointed.