Not a mandatory Master System game, but it certainly holds its own

The Sonic franchise had a long line of games in the early days, many of them considered some of the best from their two respective systems. Whilst of course the first two Sonics on the Genesis sold incredibly well, the two Master System counterparts also sold well in Master System-centric areas. Sonic the Hedgehog on the SMS also has the title of the last game to come out for that system in North America and was programmed in as a free game in certain Master System IIs. Sonic 2 on the SMS actually took an entirely different route, bringing a completely original game to the Master System, not being influenced by its Genesis brother at all, in fact, it was released before the Genesis version and was the first appearance of Miles Tails Prower.

Which is why it seems so strange that Sonic Chaos changes up... pretty much everything, sometimes for the best, sometimes for the worst. Whilst I'm incredibly appreciative that Sega decided against just copying a Genesis game again and downgrading it, there are other aspects of this game that ended up worse or weirder than previous Master System Sonic games. I guess the first thing they changed is the length of the game and this is definitely the most obvious. This game is really, really short. Like, unbelievably. This game can be completed in less than a half hour with no problems whatsoever. In fact, if you're pretty experienced you should have no problem breezing through in twenty minutes. Buying this, you may be looking for something to keep your attention for hours on end and if this is your goal, Virtual Console can supply you with hundreds more time-consuming games. If you're looking for a game to pick up every few days or once a week for an hour or less, this is pretty much prime material. Regardless of the details (of which we will delve into through the review), this is a really fun game. 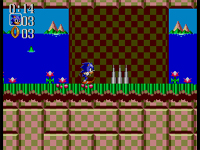 I would rest your purchase on one question: Do you enjoy easy games? If you do, this is absolutely a game you should at least check out. Because of its brief length and its easy difficulty level, Sonic Chaos ends up being a game for Sonic fans, side-scrolling fans and children alike. Although possibly, it's highly unlikely that you will die before you complete the game and for children especially, being able to play a Sonic the Hedgehog game without crippling difficulty is a tempting option over the other games on the VC.

Boss A.I. should probably be taken into question also. They have been programmed to attack in the same way every time and usually you can jump on them and stay on top until you have damaged them enough that they perish. It is the easiest set of Sonic bosses I have ever played against. This is unacceptable to a degree as I feel like the time playing could have been lengthened just by having more epic bosses with more complex attacks and rhythm. Another thing is unlike the other SMS games, getting rings is possible before taking on the bosses and this means that the risk factor is far less. As any Sonic player knows, you got one ring? You're probably OK. This means that if you know what you're doing, it's practically impossible to feel any real source of danger when facing a boss.

Graphically Sonic Chaos just looks odd. Not terrible, not good, but odd. It looks like they tried to implement a new graphical style or separate this game from the first two SMS games but instead of looking nicer, it looks more intricate but way more goofy. Looks a little less colorful, maybe a little less vibrant of a palette. 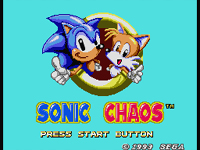 Sonically (no pun intended) the game tries its best with the sound chip available but definitely misses the mark more than it hits. It just has no real memorable songs, unlike the first two SMS Sonic games. The songs don't really bring any feeling to the environments.

In relation to its gameplay, Sonic Chaos is closer to other Sonic games on the system, albeit a little more flawed. I had a few times where the frame rate dropped significantly, however this was few and far between. Going through a loop-de-loop seems a little awkward and not programmed properly, but that aside basically everything checks out nicely. Sonic has the addition of the spin-dash which is a big plus, being one of the better additions from the second Genesis game. Playing with Sonic or Tails practically has no differences, but it is nice to have the choice between each.

Sonic Chaos is a nice addition to the Master System library. The gameplay is solid whilst the graphics and sound leave a little to be desired. The game is very much short and sweet, however the difficulty may tilt a little too far on the easy side. Sonic Chaos is not a mandatory Master System game, but it certainly holds its own.