One of the Sega Master System's better games

The difference between those early days and Sonic's latter days are incredible. Sonic 06 came out the same year as Sonic and the Secret Rings, one of them was OK, one of them was awful, perhaps one of the worst games ever made. Compare that with Sonic the Hedgehog (the Genesis and Master System versions), like, what happened? Those games were written in assembly language for gods sake...

I guess knowing the history helps, but looking back at these first games and comparing with no context is baffling, because not only is the Genesis version obviously one of the killer-app games of that generation, Sonic the Hedgehog on the Master System is one of the better SMS games available, especially in the North American line-up. Very much an original invention stemming from the Sonic world, Sonic the Hedgehog for the SMS takes few ideas from the original Genesis game and spins them on their head to make original worlds, mechanics and stages. 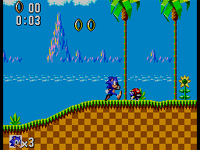 Whilst influenced by Sonic the Hedgehog on the Genesis loosely in terms of its environments, Sonic on the SMS feels, dare I say... more exotic than its Genesis counterpart. Its environments change on a whim with every conquered boss. Green Hill Zone levels transition to water levels (Labyrinth), jungle levels (Jungle) and some kind of 'cyber-punk' lonely world (Scrap Brain) that involves moderate puzzle solving and interestingly crafted level design. All these levels were just so diverse, colorful and really made you feel different emotions for every place. The jungle was happy and eclectic, the Scrap Brain was claustrophobic and lonely. There is definitely a lot to be said about how Sega decided to really make their own thing with this.

The controls are standard platforming fare in terms of how to move Sonic or attack, however it's just how incredibly tight the controls are that make this such an interesting stand out for the Master System. See, Master System games generally had a few technical weaknesses stemming from either the hardware it was working with or shoddy programming. An example of the hardware would be its sound chip, basically making it impossible to have a predisposed bass and having to make do with three same-sounding musical lines. Examples of shoddy controls to an extent are all around the SMS library, even games that are surprisingly enjoyable. Games such as The Lucky Dime Caper starring Donald Duck have this slight slippery feeling to them which leaves things more to chance sometimes than say, your average Mario Bros. game of the time. Sonic the Hedgehog, I can happily say, is one of the tightest games for this system and you won't find any accidental deaths due to slippery controls here.

Graphically this game looks great. When comparing the hardware of the SMS graphically with the computers and consoles of the day, no contest the Sega Master System was a powerhouse and it really shows in this game. The graphics are vibrant, saturated, detailed and vast. One minute you're in the familiar terrain of the Green Hill Zone, next you're in the exciting colorful Jungle Zone landscape. It's a game that immediately grabs you with how detailed it is. What's really impressive is just how easy it is to distinguish the character sprite as Sonic... I know that sounds silly, but sometimes it wasn't a matter of detailing characters as much as possible back in these days, it was just to make the sprite LOOK like the character itself. The game can look at times inviting and then intimidating, vast landscapes for sure. 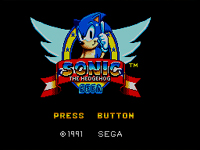 Sonic's music has some catchy and memorable tracks, some of the better on the Master System. The Jungle Zone (which I know I come back to a lot but it's a great zone) has a very uplifting and catchy tune, whilst Scrap Hill Zone feels lonely and more important. Labyrinth Zone probably has the coolest of the songs, sounding like it was made for a water zone, like they really used the SMS's chip to the max to get a cool, water-level sound. Boss levels are always Robotnik and like most SMS bosses, they are formulaic and programmed to be beaten easily, however I will say that they are enjoyable enough and I do like that it is Robotnik each time and not a different boss before Robotnik at the end. The length of the game depends on if you've played it and completed it before but a seasoned game-player with prior experience could beat the game in roughly thirty minutes. It's short no doubt, but without playing it before it could take considerably longer.